This issue of Jump Pack 2014 also included a code for a 3-month weekly digital subscription to Weekly Shonen Jump, which when upon being redeemed, would automatically give the user a chance to win a copy of the Weekly Shonen Jump Alpha July 2012 membership promotional card, "Slifer the Sky Dragon".[1] 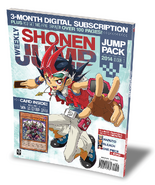 English
Add an image to this gallery