View source
watch 02:56
Raise a Floppa - The Loop
Do you like this video?
Play Sound
Not to be confused with Ishizu Ishtar.

Isis (神官アイシス Shinkan Aishisu) was one of the six Sacred Guardians who served under Pharaoh Atem and the wielder of the Millennium Necklace. Ishizu Ishtar is her modern day reincarnation. She is named after the ancient Egyptian goddess Isis.

Isis is a wise, kind and intelligent woman. She seems to share a close and affectionate relationship with Mahad in the anime, as she converses with him before he goes off to fight Bakura. She is able to sense his plight during the duel with Bandit King Bakura, and utters his name with tears flowing down her cheeks. Isis alone senses Mahad's demise, and cries out his name tearfully, showing that she deeply cares about him.

Isis is a High Priestess serving Pharaoh Atem. She wields the Millennium Necklace. She attempted to fight off Bakura and his "Diabound", but failed, sacrificing her "Spiria" to save the other Priests who also tried to fight Bakura. Bakura fled when Atem Summoned "Obelisk the Tormentor". She was present during the Shadow Game at Kul Elna against Bakura and his "Diabound". "Diabound" was eventually destroyed, and Bakura died. However, Zorc Necrophades was successfully resurrected. During the Royal Court's fight with Zorc, she died to give Mana time to give the Priests their Millennium Items. 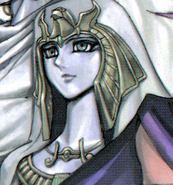 *Disclosure: Some of the links above are affiliate links, meaning, at no additional cost to you, Fandom will earn a commission if you click through and make a purchase. Community content is available under CC-BY-SA unless otherwise noted.
... more about "Isis"
RDF feed
Anime appearances
Yu-Gi-Oh! (anime) +
English name
Isis +
Gender
Female +
Advertisement