He is the most powerful being in the Yu-gi-oh series and is considered as the “Ultimate God” of the series, being the merger of The Winged Dragon of Ra, Slifer the Sky Dragon, and Obelisk the Tormentor.

She had destroyed the Dark One with just one light-related attack. The Creator of Light later spoke to Atem directly, saying that it was his friends who had helped him remember his long-forgotten name; that he was one step closer until his spirit returns to his final resting place. She also revealed that this was the final evil that Atem and his friends would have to face together. 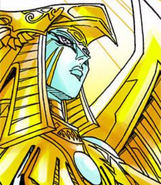 Retrieved from "https://yugioh.fandom.com/wiki/Holactie_the_Creator_of_Light_(character)?oldid=3976105"
*Disclosure: Some of the links above are affiliate links, meaning, at no additional cost to you, Fandom will earn a commission if you click through and make a purchase. Community content is available under CC-BY-SA unless otherwise noted.