This set introduces the new "Constellar" and "Lswarm" archetypes as well as further support for "Laval", "Gem-Knight", "Gishki" and "Gusto" cards. It also features cards used by Raff, Bronk Stone and Nelson Andrews.

This set contains 70 cards, including: 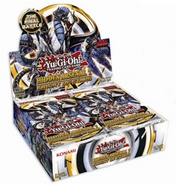 English Booster box
Add an image to this gallery

Retrieved from "https://yugioh.fandom.com/wiki/Hidden_Arsenal_7:_Knight_of_Stars?oldid=4279213"
*Disclosure: Some of the links above are affiliate links, meaning, at no additional cost to you, Fandom will earn a commission if you click through and make a purchase. Community content is available under CC-BY-SA unless otherwise noted.