The Heartland Theme Park is the amusement park from Heartland, whose director is Mr. Heartland. It is a very popular park in the Yu-Gi-Oh ZEXAL manga, and contains many attractions that attract people from many different places. Because of that, Dr. Faker "provided" 3 Numbers Hunters to hunt "Numbers" secretly inside the park, disguised as employees. They are Captain Corn, Thunder Spark and Cologne, who got known as the "mascots of the park". Mr. Heartland also allowed Duelists to enter the park for free, to make the hunt for "Numbers" easier.

After Mr. Heartland's probable death, Kyoji created a duplicate of him made with spiders and took advantage of the theme park. He arranged a double Duel involving the Number Hunters, which was held in the park's newest attraction - the Heartland New Tower. 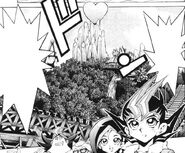 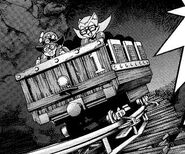 The roller coaster from the "Crystal View Coaster" attraction.

The "Shriek'n'Slide" ("Surprise Slide" in the Japanese version). 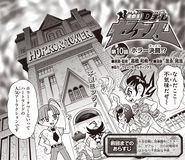 The Ferris wheel.
Add an image to this gallery
Retrieved from "https://yugioh.fandom.com/wiki/Heartland_Theme_Park?oldid=2692718"
*Disclosure: Some of the links above are affiliate links, meaning, at no additional cost to you, Fandom will earn a commission if you click through and make a purchase. Community content is available under CC-BY-SA unless otherwise noted.