It is composed of two towers, which are connected by a globe surrounded with stripes. Each tower contains a Dueling stadium - the Red Stadium and the Blue Stadium. According to Luna, the upper part of the building is actually a device which can open the door to another world, causing the annihilation of Heartland City in the process.

Front view of the building. 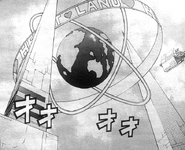 The device to open the door to another world.

The Red Stadium.
Add an image to this gallery
Retrieved from "https://yugioh.fandom.com/wiki/Heartland_New_Tower?oldid=3224102"
*Disclosure: Some of the links above are affiliate links, meaning, at no additional cost to you, Fandom will earn a commission if you click through and make a purchase. Community content is available under CC-BY-SA unless otherwise noted.