Ghost Rare, known as Holographic Rare in the OCG, is a rarity introduced in the TCG version of Tactical Evolution.

Ghost Rare cards have a very shiny silver lettering for the card name, much like a Secret Rare, with some colors removed from the card image. The body of the monster itself seems split, making the image look 3D. If a light is shone on the card image, the color changes. As a result, it can be hard to make out the monster on a card colored this way. At a certain angle the image's color is somewhat restored with the same colors as the normal card just in a dimmer version. The overall effect of these changes is a pale, "ghost-like" appearance to the card art, especially when scanned. Starting with the TCG set Legendary Duelists: Rage of Ra released in September 2020, the Level/Rank and Attribute of the card are also holofoil, to match how Super Rare and Ultra Rare cards have been printed since July of 2017.

Ghost/Gold Rare cards, a hybrid between Ghost Rare and Gold Rare, can also be found in the Gold Series: Haunted Mine packs.

From Tactical Evolution to Lord of the Tachyon Galaxy the cover card of a pack was released as Ghost Rare, with the exception of "Rainbow Neos" in Phantom Darkness. From Judgment of the Light onward, the Cover Cards are no longer automatically the Ghost Rare for the set—now the Ghost Rare can be any one of the Secret Rares featured in that set (the exception being "Dark Rebellion Xyz Dragon" in The New Challengers, and "Clear Wing Synchro Dragon" in "Crossed Souls" which were both a cover card and a Secret Rare). Starting with Breakers of Shadow, Ghost Rares are no longer going to be present in regular booster sets. "The Winged Dragon of Ra" has since been reprinted as a Ghost Rare in Legendary Duelists: Rage of Ra.

On the Official Card Database, this rarity is labelled as Holographic Rare. 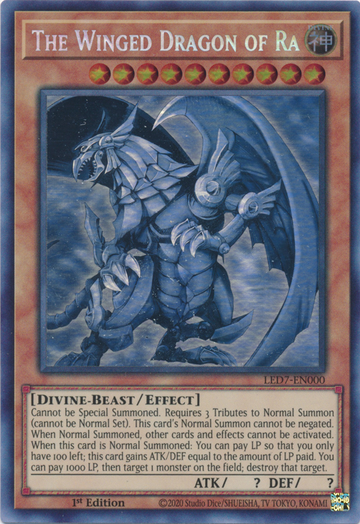