Start a Wiki
For the card, see Fusion Substitute.

A Fusion Substitute Monster (モンスター Yūgō Sozai Daiyō Monsutā) is a monster with an effect that allows it to replace a single specifically named Fusion Material for the Fusion Summon of a Fusion Monster (with the exception of "Shaddoll Core", which substitues for Attributes instead), as long as the other monster(s) used are the correct one(s).

This card can be used as a substitute for any 1 Fusion Material whose name is specifically listed on the Fusion Monster Card, but the other Fusion Material(s) must be correct.

— The latest version of the wording used on Fusion Substitute Monsters in the TCG.

The effect that allows Fusion Substitute Monsters to replace a Fusion Material has no classification. It applies on the field (even while face-down), in the hand, and in the Graveyard. It does not apply while in the Main Deck or while banished, so this effect cannot be used for "Future Fusion" or "Parallel World Fusion". 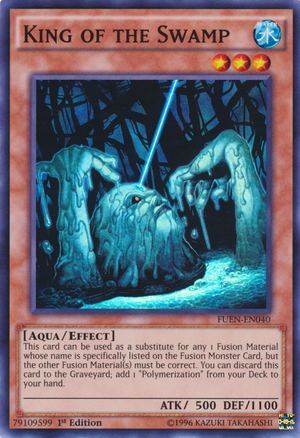 Retrieved from "https://yugioh.fandom.com/wiki/Fusion_Substitute_Monster?oldid=3954570"
*Disclosure: Some of the links above are affiliate links, meaning, at no additional cost to you, Fandom will earn a commission if you click through and make a purchase. Community content is available under CC-BY-SA unless otherwise noted.