Equip Trap Cards (「罠・装備カード」, lit. "Trap-Equipment Card") are a type of Trap Card existing only in the Yu-Gi-Oh! R manga. They are a type of Equip Card. Examples include "Metalmorph", "Amulet of Affection", and "Mirror Barrier".

In the OCG/TCG, some Normal Trap Cards, such as "Metalmorph", are treated as Equip Cards upon activation (they are still treated as Trap Cards while equipped). However, they are never officially referred to as "Equip Trap Cards". 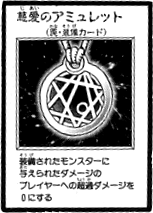 Retrieved from "https://yugioh.fandom.com/wiki/Equip_Trap_Card?oldid=3103566"
*Disclosure: Some of the links above are affiliate links, meaning, at no additional cost to you, Fandom will earn a commission if you click through and make a purchase. Community content is available under CC-BY-SA unless otherwise noted.