The set features a lot of the latest cards from the Yu-Gi-Oh! 5D's anime used by Crow Hogan, as well as containing support for the "Blackwing" archetype. It contains 5 new cards along with 25 reprints. 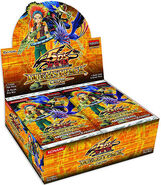