Duelists will be in for a treat with the Duelist Alliance Deluxe Edition, which comes with more guaranteed foil cards than ever before! Jam-packed with nine Duelist Alliance booster packs, Duelists will be thrilled to get their hands on cards for Shaddolls, Yang Zing, Superheavy Samurai, Ultra Athletes, Lightsworn, Stellarknights, and Pendulum Monsters! Not only will Duelists get 2 Ultra Rare versions of Common and/or Rare cards found in Duelist Alliance, but the Deluxe Edition also includes 3 of 5 Super Rare versions of preview cards from the November booster release, The New Challengers! Each Deluxe Edition also comes with a handy Beginner’s Guide that features instructions on how to Pendulum Summon, the powerful new game mechanic for the Yu-Gi-Oh! TCG.

Each Deluxe Edition comes in a storage box adorned by the forces of darkness or light, in one of two elaborate designs – one featuring the radiant Lightsworn, and the other the sinister Shaddolls![1]

Each Duelist Alliance: Deluxe Edition is comprised of: 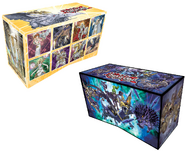