The Duel Terminal (デュエルターミナル Dyueru Tāminaru) was designed by Konami to assist in introducing the then new Yu-Gi-Oh! 5D's anime to new and existing players.

The Duel Terminal itself looks like a traditional arcade machine, and has a variety of game modes, using cards from the Yu-Gi-Oh! Official Card Game. Players can either use a Deck chosen by the system, or the Duelist can use his/her own cards, provided they have ＤＵＥＬ ＴＥＲＭＩＮＡＬ as the Edition. These cards are recognized by the built-in card scanner, allowing the player to use the card in the game. "Duel Terminal Edition" cards are only available from "Duel Terminals". The game itself is priced at ‎¥100 per play in Japan, $1 per play in the United States, and $13 per play in Mexico. After ending the game, a Duel Terminal Edition card is released at the bottom of the machine.

Duel Terminal cards themselves are not playable in sanctioned tournaments unless they have also been released in a more widely available source.

These new cards that Konami has released even come with their own storylines, which were shown in Master Guide 3.

The first Duel Terminal series features non-stop wars between tribes for supremacy, but none of them had the powers to overcome the others. However, invaders from space, the "Worms", arrived, interrupting their endless war. The native tribes created a temporary truce to fight off the invaders. Chaos seemed to be arriving.

In the second Duel Terminal series, there lived 4 different elemental tribes: ("Gem-Knight", "Laval", "Gishki", "Gusto"). Like the first series, they too fought each other, but for their own reasons, not for supremacy. In the heavenly sky, the "Vylons" descended to cease wars; however, at the same time, deep within the earth's crusts, an evil group of creatures known as the "Steelswarm" awoke and began to invade the surface world. Wanting to protect their homeland, the 4 tribes joined together with the "Vylons" and obtained new powers from them.

After defeating the "Steelswarm", the "Vylons" decided the most logical way to prevent any more wars was by eliminating the other tribes. As the other tribes were all threatened by this, they joined together and combined their powers to resist the judgement of the Vylons. This new alliance finally triumphed, as they found the Vylons' weakness and used it against them.

After the "Vylons" fled, the clans broke up their temporary truce. The "Lavals" have now become a massive power source to fuel the rituals of the "Gishki". Then, the "Gishki" decided to take over the Mist Valley region in order to collect raw material for their projects, which began a large genocide against the "Gustos". Though there were a few "Gustos" left, they were saved by the justified "Gem-Knights".

While another fight had been brought again, a new evil appeared; it seemed that the "lswarm" virus had spread rapidly, infecting any and all it came in contact with. Seeing nothing but despair around them as their own allies attack one and another, they prayed for the assistance of the "Constellar", a legend that has been passed down for generations. Somewhere around the battle, the "Gishki" tried to revive the dragons of the "Ice Barriers" to fight off the infection, but then the leader of the "Gishki" was plagued by the "lswarm" and so far, the rest began to follow. Unable to control their movements, the "Gishki" managed to resurrect the leader of the "Steelswarms"; however, the "Gem-Knights", with their sense of justice, stood by with the "Constellar" knowing there was still hope left. Using every amount of their powers, the "Gem-Knights" combine together into the light that would save the world. After being amazed by the fusion power of justice and unity of the "Gem-Knights", the "Constellar" awakened their true power transforming themselves in one being of a legendary dragon. With all this non-stop negative impact giving off, the winds of the Shrine of Mist Valley stirred even more, which unintentionally summoned "Sophia, Goddess of Rebirth". With the world threatened, "Constellar Sombre" and "Evilswarm Kerykeion" teamed up to defeat "Sophia". After this, "Sombre" and "Kerykeion" ascend to a higher state of being. The only few survivors are Gishki Avance and Gishki Emilia (who would later become Great Sorcerer of the Nekroz and Dance Princess of the Nekroz), Kamui, Hope of Gusto (who would later become Ritual Beast Tamer Elder) and Reeze, Whirlwind of Gusto, and Steelswarm Roach (who would later become Evilswarm Exciton Knight). 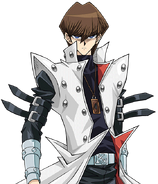 The Duel Terminal allows you to choose between several modes of play:

For every two Duel Terminal sets released, a guidebook that also includes a promotional card was published. Acceleration Guides include Synchro Monsters, while Overlay Guides include Xyz Monsters.

Seven Duel Terminal sets were released in the United States, in addition to two versions of the preview set.