The Duel Computer (ﾃﾞｭｴﾙｺﾝﾋﾟｭｰﾀｰ Dyueru Konpyūtā), also known as the Duel Machine (決闘マシーン) in the Japanese version, is a computer used by Seto Kaiba to practice dueling against. It appears in the anime when Kaiba tests his new Duel Disks and "Obelisk the Tormentor". Giving the computer his old deck, he defeats it using "Obelisk". Due to the excessive power of "Obelisk", the computer overloaded and exploded. 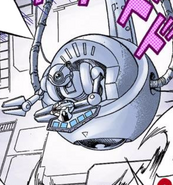 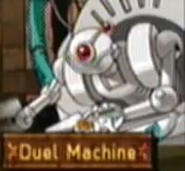 Duel Machine (The Dawn of Destiny)

The Duel Computer used many of Kaiba's Duelist Kingdom cards, including his "Blue-Eyes White Dragons".

Retrieved from "https://yugioh.fandom.com/wiki/Duel_Computer?oldid=4301444"
*Disclosure: Some of the links above are affiliate links, meaning, at no additional cost to you, Fandom will earn a commission if you click through and make a purchase. Community content is available under CC-BY-SA unless otherwise noted.
... more about "Duel Computer"
RDF feed
Anime appearances
Yu-Gi-Oh! (anime) +
English name
Duel Computer +
Japanese translated name
Duel Machine +