Dragon (Chinese: 龍族; only on the Chinese version card of "Blue-Eyes White Dragon") is a powerful Type to contend with, often focusing on brute ATK strength and powerful Fusion, Synchro, and Xyz Monsters. Dragons tend to be the strongest or key monster in numerous Deck types that would otherwise have nothing to do with dragons. Ever since the Yu-Gi-Oh! Trading Card franchise began, Dragon monsters have been known for having attack points greater than any other type of monster in the game (also being the one of the most popular monster-types). Dragons and Dragon support cards also tend to have effects that Special Summon other Dragon-Type monsters, such as "King Dragun", "Queen Dragun Djinn", "Red-Eyes Darkness Metal Dragon",""Lord of D." and "Lady of D.", in combination with "The Flute of Summoning Dragon", "Decoy Dragon", etc. There are Dragon-Type Monsters for every single Attribute (except for DIVINE, though two of the three Divine-Beast cards are referred to as dragons, namely "The Winged Dragon of Ra", and "Slifer the Sky Dragon"); mainly LIGHT, DARK, WIND and FIRE. It's rare to find WATER-Attribute Dragon, though.

To date, there are no Flip Effect Dragon-Type monsters.

The Dragon-Type is certainly one of the contenders for "most Type-Specific support cards". Most Dragon-Type monsters have the word "Dragon" in its card name. The word "Dragon" also exists in many non-Dragon Monster Card names, typically denoting a creature of exceptional power. Examples include "Cyber Dragon" (along with its upgraded forms), "Power Tool Dragon", and "Brionac, Dragon of the Ice Barrier".

There are some series and archetypes that's composed mostly (if not all) Dragon-types, such as "Blue-Eyes" and "Red-Eyes", and also recently, "Hieratics" and "Dragon Rulers".

A recent trend with multi-Type archetypes is having the trump card of the archetype to be set as a Dragon-Type, unlike some of the other monsters in the archetype, such as:

In every Yu-Gi-Oh anime and manga series up to date, the main character's rivals all use Dragon-based Decks. Seto Kaiba uses a Blue-Eyes Deck, Chazz Princeton uses an Armed Dragon Deck in most seasons (or "Light and Darkness Dragon" Deck in the manga), Jack Atlas's both Turbo and Ground Deck is based on summoning his "Red Dragon Archfiend", while also include other Dragon-type monsters such as "Exploder Dragonwing" and "Vice Dragon". In addition, Kite Tenjo's Deck also focused on his ace monster, "Galaxy-Eyes Photon Dragon".

Some dragon Decks are based on the LV Dragons, Armed Dragon and Horus the Black Flame Dragon. These Decks usually focus on leveling up their monsters quickly. To protect the high level monsters from Trap Cards, "Royal Decree", "Jinzo", "Trap Stun" or "King Dragun" are used. "Horus the Black Flame Dragon" has added protection from Spell Cards and is well known for the infamous Horus Decree lockdown. Horus and Armed Dragon cards can even be combined to make a Deck that not only locks down Spell and Trap Cards, but also controls the opponents monsters that may get in your way.

These types of Decks often focus on getting Fusion Monsters like "Five-Headed Dragon", "King Dragun", "Blue-Eyes Ultimate Dragon", and sometimes even "Dragon Master Knight" or Blue-Eyes Shining Dragon to the field. Usually "Dragon's Mirror" or "Future Fusion" is used to accomplish these tasks. If you want to summon "King Dragun" quickly, "The Dark - Hex-Sealed Fusion", along with other substitute Fusion-Material monsters, can be of great help.

This type of Deck is pretty old fashioned, focusing on beating down your opponent with high-ATK Dragons such as "Alexandrite Dragon", "Luster Dragon", "Tyrant Dragon" and many more. "Red-Eyes Darkness Metal Dragon" immensely helps this deck due to not only able to revive any of your fallen Dragons, but also have 2800 ATK for beating. "Dragon's Rage" can also helps dropping your opponent's Life Points faster, while cards like "Stamping Destruction" and "A Wingbeat of Giant Dragon" clears opposing backrows that may block your attacks.

From this point, many variations of Dragon decks have been invented and updated, some of them are: Hopeless Dragon, Disaster Dragon, Hieratics, and Dragon Rulers.

Since their first introduction, Dragons have received many support cards that enables them to prevail in ever-expanding Metagame throughout the game's history. However, they're still have weaknesses that can be exploited in order to keep them in check. Most of the more-powerful Dragons are high-Leveled, and many of them need Special Summons to make things quick, which means anti Special Summon cards like "Vanity's Emptiness", "Fossil Dyna Pachycephalo", and "Evilswarm Ophion" can halt their moves. There are also several Anti Dragon-type cards (Cards that specifically counter Dragon-types) that can hinder their agrresion, such as "Buster Blader" (also with "Dark Paladin"), "Dragon Capture Jar", "Victoria", etc. Cards that can hinder specific mechanics like "Imperial Iron Wall" and "Mask of Restrict" can also stop this deck, since most of the recent Dragon decks either needs to Tribute (like Hieratics), banishing cards (like Dragon Rulers), or both in order to Special Summon their monster. 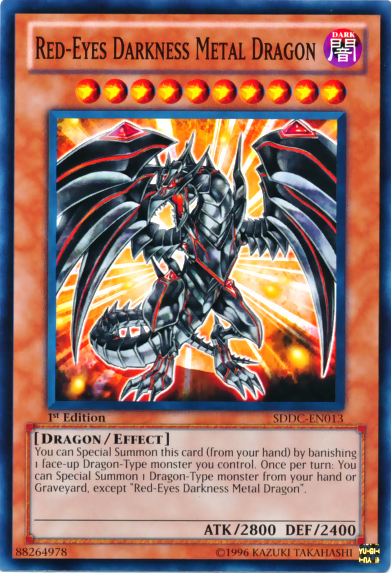 Retrieved from "https://yugioh.fandom.com/wiki/Dragon?oldid=2655973"
*Disclosure: Some of the links above are affiliate links, meaning, at no additional cost to you, Fandom will earn a commission if you click through and make a purchase. Community content is available under CC-BY-SA unless otherwise noted.