In Yu-Gi-Oh! R and in the Yu-Gi-Oh! 5D's anime, the Wicked Gods and the "Aesir", respectively, are also Divine-Beast-Type monsters, unlike their real-life counterparts.

Prior to the release of the legal prints of "Obelisk the Tormentor", "Slifer the Sky Dragon", and "The Winged Dragon of Ra", Divine-Beast was not a legal Type. With their release, it can now be declared with cards like "DNA Surgery".

There is currently no support for Divine-Beast-Type monsters; however, "Ra's Disciple" and "Holactie the Creator of Light" both support the primary three monsters with this original Type by name. Additionally, because all monsters with the original Type of Divine-Beast are also DIVINE-Attribute, they are also supported by cards that support DIVINE, such as "Mound of the Bound Creator" and "The True Name". 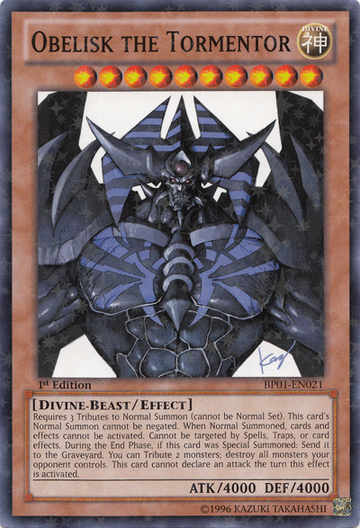 Retrieved from "https://yugioh.fandom.com/wiki/Divine-Beast?oldid=3787220"
*Disclosure: Some of the links above are affiliate links, meaning, at no additional cost to you, Fandom will earn a commission if you click through and make a purchase. Community content is available under CC-BY-SA unless otherwise noted.