Diabound was Thief King Bakura's ka, created by the spirits of the slaughtered town of Kul Elna desiring revenge. It had the power to absorb the abilities of other ka it defeated, and its form evolved as its powers grew.

Priest Seto was unable to seal it in the original stone tablet because it was originally sealed beneath the chamber in the village. How Diabound came to be sealed in stone is unknown. However, if the existing Diabound is destroyed, the tablet itself that has the image of this monster is destroyed along with it.

After the Kul Elna massacre, Diabound was created by the rage of the village's slaughtered victims. It is unknown how it was sealed in stone and how Bakura first came into contact with this monster.

Diabound is first Summoned when Bakura entered Pharaoh Atem's palace in his first attempt to take the Millennium Items. Everyone present is shocked by the strength of Bakura's hatred and that Diabound is actually a holy spirit, which Bakura claims is due to his loyalty to his cause. Priest Seto ignores the spirit's strength and attempts to seal Diabound in a stone tablet with his Millennium Rod, but Diabound breaks free with ease. Unfazed, Seto instead Summons "Galestgoras" to Duel Diabound. Galestgoras battles well, but Bakura uses the special power of Diabound to shatter the tablet that Summoned Galestgoras. He then has Diabound engage in battle with the other ka Summoned by the Priests and easily overpowers them. Atem, after reclaiming his father's mummy from Bakura, Summons one of the three Nameless Gods, "Obelisk the Tormenter" and soon Bakura finds himself on the receiving end of an easy overpowering. Despite his loss, Diabound is able to survive and Bakura escapes.

Bakura later Summons Diabound when Priest Mahad, bearer of the Millennium Ring, leads him into Aknamkanon's tomb to Duel. Despite Diabound having evolved into a new form due to Bakura's hatred becoming stronger, inside the tomb, Mahad's "Illusion Magician" is able to fight at its full power and the two battle evenly. The Priest fuses his ba with Illusion Magician into the "Dark Magician" and attempts to destroy Diabound for good.

Bakura survives again, and infiltrating the Shrine of Wedju to attack Aknadin, he has Diabound, whose form has evolved yet again with the acquisition of the Millennium Ring, use its phasing power to destroy the stone tablets before Aknadin can Summon them. When he flees from the Shrine, he Summons Diabound as the Pharaoh pursues him with "Slifer the Sky Dragon", another of the Nameless Gods. Despite its power-up, Slifer retains the advantage, until Bakura begins attacking the townspeople, forcing Slifer to defend them, not only taking the attacks but also restricting its movement. Diabound hides with its power and nearly kills Atem, but the Priests intervene and rescue him. Diabound defeats Slifer when Aknadin, now fully evil thanks to Bakura's and Aknadin's previous encounter, stabs the stone tablet, which paralyzes "Slifer", giving Diabound a chance to destroy it, but is saved when Bakura has Illushu intercept the attack of Duos. Bakura takes the Millennium Pendant from Atem and leaves him for dead after throwing him from a cliff.

Atem survives, coming to Kul Elna to reclaim the Pendant and defeat Bakura. Bakura Summons the again-evolved Diabound, and the Pharaoh is defended by Mahad in the form of Dark Magician. With Diabound handicapped protecting the Millennium Stone, the battle proves to be largely even, but Diabound resists repeated attempts to slay it and phases into the walls. Shada's attempts to find it prove unsuccessful until Atem has Mahad open up holes in the ceiling to let light into the chamber and reveal Diabound. Diabound is able to survive when Bakura has the spirits of Kul Elna form a protective shield around it. The Priests arrive to save Atem after Shada is injured. They Summon their ka, but Diabound once again overpowers them until Karim has the idea to use the Millennium Scale to combine the ba of two ka, Duos and Curse of Dragon, into Duos Dragon. The fused ka proves to be an equal to Diabound when enhanced by Mahad's magic, but is unable to break through the shield. Bakura seizes his chance to injure Karim and take the Millennium Scale, separating Duos Dragon. Pharaoh Aknamkanon's spirit then appears, and repels all the spirits, weakening Diabound. Mahad then destroyed him with a powerful spell. With Diabound's destruction, Bakura slowly dies as well.

When Yami Yugi enters the world of his memories to relive the events of his death, he replays his battles with Bakura and Diabound. In a departure from the original events of history, Yugi Muto reunites with Yami Yugi and replenishes his energy after the destruction of Slifer, allowing the Pharaoh to Summon "The Winged Dragon of Ra" and destroy Diabound with its Egyptian God Phoenix form. However, Yami Bakura (on the RPG table) reverses time, undoing the death of Bakura and Diabound. When Diabound is destroyed during the battle at Kul Elna, Yami Bakura resurrects Bakura and Diabound, and they later sacrificed themselves to summon Zorc Necrophades.

Diabound has a half-human body with muscular features along with three horns on the back of its head and the second on the front with different angles. It has a tail with the head of a snake at the end of it, as well as four feathered wings– two on his back and two on his lower torso near the waist.

Diabound can change its features and appearance as Bakura's hatred increases, as it absorbs more ka, or when the Millennium items are present, making it more demonic and bestial. Over the course of the story, its grey skin darkens to dull green with blue stripes and underbelly, its mouth becomes gaping and full of fangs, its fingers become encased in claw-like armor, its serpent head gains a cobra-like hood, and a large eye appears on its chest.

On the stone tablet of "Diabound", the monster's snake-tail is shown curled into an Ouroboros – an ancient symbol represented as a serpent or dragon biting its own tail. It represents self-reflexivity or cyclicality, especially in the sense of something constantly re-creating itself, the eternal return, and other things perceived as cycles. It can also represent the idea of primordial unity related to something existing in or persisting from the beginning with such force or qualities that it cannot be extinguished. This is fitting, as Diabound is most characterized by its near-indestructibility, as well as its continuous cycle of self-improvement. 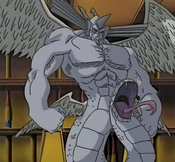 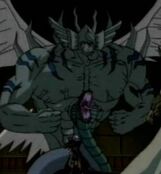 6th form (fused with "Illushu")
Add an image to this gallery

Since Diabound is the most powerful monster in Bakura's possession, it was able to defeat six of the Pharaoh's Sacred Guardians with ease and defend itself against one of the three Egyptian God monsters' attacks; but was ultimately defeated by one of their attacks.

Diabound's primary ability lies in its natural ability to evolve itself over time. Diabound has the ability to inherit the abilities and attack of each monster that it destroys in battle, growing exponentially more powerful with each victory. In addition, Diabound is capable of evolving at will in tune with Bakura's hatred or through proximity with Millennium Items in his master's possession.

Diabound's natural offensive attack is named Helical Shockwave (Rasenhadō in the Japanese anime) and takes the form of a spiral laser fired at the enemy. It later develops a second ability to conceal itself in darkness, even in the darkest part of the environment– shown to have been taken from Shadow Ghoul (Kagenuke). However, it can be cancelled if it is exposed to direct light, which renders it vulnerable to attack. It later inherits Mahad's Dark Magic Attack (Madōha), and Slifer the Sky Dragon's Thunder Force and Lightning Blast (Sandā Fōsu and Shōraidan).

When Diabound reaches its final evolution, it develops the ability to summon the evil spirits of the villagers (which were the origin of its creation) to protect him. 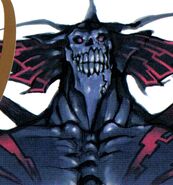 Diabound (manga)
Add an image to this gallery
Retrieved from "https://yugioh.fandom.com/wiki/Diabound?oldid=4025534"
*Disclosure: Some of the links above are affiliate links, meaning, at no additional cost to you, Fandom will earn a commission if you click through and make a purchase. Community content is available under CC-BY-SA unless otherwise noted.
... more about "Diabound"
RDF feed
Anime appearances
Yu-Gi-Oh! (anime) +
Arabic name
ديابوند +
Corresponding card
Diabound Kernel (anime) +
English name
Diabound +
Italian name
Entità Transnaturale +