Dark Tuner monsters are not just DARK Attribute Tuner monsters, but are a completely different kind of monster, identified by having Dark Tuner listed after their Type. However, according to Yu-Gi-Oh! 5D's Tag Force 4, Dark Tuners act as a subcategory of Tuner monsters. Any card that would affect a Tuner can affect a Dark Tuner the same way.

Unlike regular Tuner monsters, the Dark Tuners usually have higher Levels, with the exception of "Dark Tuner Dark Ape" and "Dark Tuner Dark Goddess Witaka", due to the fact that their Levels must be subtracted from the remainder of the Synchro Material Monsters for a Negative Level. This potentially makes them much more difficult to Summon. So far, all of the Dark Tuner monsters that have appeared have 0 ATK and DEF, with the exception of "Dark Tuner Doom Submarine", and are DARK. So far Dark Tuners have been Fiend, Warrior, Insect, Beast, Spellcaster and Machine-Type. They also all seem to have a type of dark energy core somewhere in their card artwork. 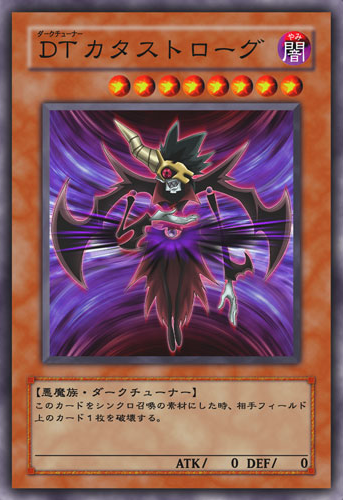 Retrieved from "https://yugioh.fandom.com/wiki/Dark_Tuner_monster?oldid=4088622"
Community content is available under CC-BY-SA unless otherwise noted.