Dark Magician Girl's outfit is similar to that of Dark Magician, except that it is mainly blue and pink with a few touches of yellow. She has blond hair, green eyes, and wields a wand that matches her outfit. In dubbed versions of the anime and cards, her bust is reduced by erasing cleavage lines, her hexagram is replaced with a red jewel (the Millennium Item symbol in Yu-Gi-Oh! GX Tag Force) and she sometimes wears pink shorts under her skirt.

Her outfit is composed of an off-the-shoulders garment that extends to her mid-thighs and ends up as a skirt. It is blue with pink trimmings and a few touches of yellow. Her hat is pointed, like Dark Magician's, except it is blue, along with pink rings and a pink spiral on one side. She wears boots reaching halfway up her thighs, and her wand, which is blue, has a spiral which is similar to the one on her hat, except that it is yellow. She wears optional pink and blue gauntlets. She has faint pink markings on her cheeks.

In the manga, in Ancient Egypt, she had tanned skin, similar to that of Mana.

Dark Magician Girl first appears as a character in the Battle City arc when Yugi faces the ex-magician Arkana, whom she defeats by drawing power from both Duelists' Dark Magician cards. One of Yugi's most expressive monsters, she also appears in the Duel between Yugi Muto and Bakura Ryou, and is seen crying when she was forced to attack by the effect of Bakura's "Dark Spirit of the Silent", which caused her owner to be damaged by the effects of "Dark Sanctuary" (implying that she actually knew that she was chosen by the effect and what would happen).

When Crump of The Big Five decides to battle Téa, she chose Dark Magician Girl as her Deck Master, whose ability allowed her to telepathically communicate with Téa and help her when she needed it. She also worried for her since she was an amateur Duelist and Crump pushed her into a corner. As a last resort, Dark Magician Girl volunteered to be Summoned though Crump points out she's only a threat if Dark Magician was out, which reveals Téa never put him in her deck (in the dub, Téa initially refused to Summon her because if she was destroyed, she'd automatically lose, but agrees to it). Téa then used her full ability, which was to empty her Graveyard of all her destroyed monsters so she could draw 4 cards from the top of her deck, one of which was "Sage's Stone" which allowed her to Summon "Dark Magician" from Yugi's Deck nearby. Both monsters then attacked with "Dark Magician" destroying Crump's "Defender Iceberg" while Dark Magician Girl attacks Crump directly, winning Téa the Duel.

Her character was shown much more clearly during the Waking the Dragons arc. She brought Yugi and Yami Yugi to the World of Duel Monsters to revive the Legendary Dragon Timaeus to help them to fight Doma. She did the same with Kaiba and Joey who gained the dragons, Critias and Hermos.

When Dartz summoned the The Great Leviathan, Dark Magician Girl opened a portal to the Duel Monsters Spirit World and led an attack against the Leviathan with Yugi, Kaiba and Joey. After the evil beast is defeated, she and the Legendary Knights help all the stolen souls from "The Seal of Orichalcos" to return to their bodies and thanks Yugi and Yami for saving both the human world and Duel Monsters Spirit World.

In the Dawn of the Duel arc, Dark Magician Girl is the Ka monster of Mana. After Mahad died and became the Dark Magician, Mana promised herself that she would become a great magician, following after her teacher.

In Yu-Gi-Oh! GX, Dark Magician Girl appears as a Duel Spirit during the Duel Festival. On the one day Duel Spirits can take physical form, the Dark Magician Girl surfaces during a school-wide festival to duel with Jaden Yuki after finding out that Syrus Truesdale had planned a Costume Duel for that day. After Jaden laments that he has no one to duel once Alexis Rhodes chases off her brother for taking a picture of her in costume and trying to send it to their family, the Dark Magician Girl shows up and tells Jaden that he can have a duel with her. With the exceptions of Jaden, Syrus, and Chazz Princeton, nobody thought that she was the real Dark Magician Girl because everyone was in Duel Monsters costumes. Syrus harbors feelings for her, and Jaden considers her a formidable opponent. Bastion Misawa pointed that Dark Magician Girl should have been in Yugi Muto's Deck. The crowd cheered actively for her, and even though she lost, she didn't care because she had so much fun. Before the day ended, she used the last of her energy to give Syrus a kiss on the cheek and then she went back into her card.

When Dark Magician Girl was Summoned by the effect of "Bond Between Teacher and Student", she acts very childish and became worried when she saw Paradox's monsters. Dark Magician encourages her that victory can be assured when they join forces with their master. 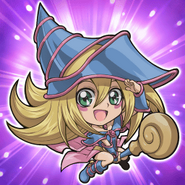 In Yu-Gi-Oh! GX, Dark Magician Girl plays a Spellcaster Deck, which focuses on her own card and a swarming strategy from the Removed from Play Zone.