Dark Magician, known as Black Magician (ブラック・マジシャン, Burakku Majishan) in the Japanese versions, is a character version of the card, "Dark Magician".

Dark Magician was created when Mahad fused his ba with "Illusion Magician", his ka while fighting Thief King Bakura.

When "Dark Magician Girl" was Summoned by the effect of "Bond Between Teacher and Student", she became worried when she saw Paradox's monsters. Dark Magician encouraged her that victory can be assured if they joined forces with their master (in the dub, he stated that as magicians, there was no trick they couldn't pull off).

In The Falsebound Kingdom, when the player goes back to Yugi's story the second time, Dark Magician will appear when the player defeats mission eight. He was waiting for Yugi, he tells Yugi about the past and then he joins the party. When Dark Magician Girl arrives late, Dark Magician was furious and told his student not to make any excuses. When Yugi ask who she was, Dark Magician says that she was a student called back from her training. He will ask Yugi to put her in the bottom of the roster. 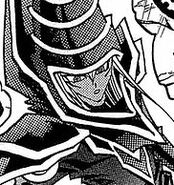