Start a Wiki
This article is about the Attribute. For the character whose Japanese name is "Divine", see Sayer. For the Alignment, see Divine (Alignment).

DIVINE ( Kami, "God") is one of the seven legal Attributes in the Yu-Gi-Oh! TCG and OCG.

The DIVINE Attribute was initially only used on the three original Egyptian God cards, which were illegal in official play. Thus, the Attribute was not considered legal until the end of 2008, when "Obelisk the Tormentor" was first released in the OCG as an Effect Monster and a V Jump promotional card. With the release of Battle Pack 2: War of the Giants in 2013, all three Egyptian God cards have received legal releases in all regions of both the OCG and TCG.

The DIVINE Attribute's exclusive nature makes it useful in some cases; for example, it is the only Attribute unaffected by "Clear World".

The DIVINE icon uses the same background as the LIGHT icon.

In Yu-Gi-Oh! BAM, the DIVINE Attribute is used by the Sacred Beasts; "Raviel, Lord of Phantasms", "Uria, Lord of Searing Flames" and "Hamon, Lord of Striking Thunder". DIVINE cards have their own black and gold frame and only one DIVINE card can be included in a Deck.[1] 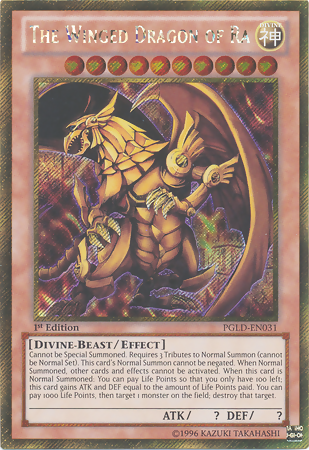 Retrieved from "https://yugioh.fandom.com/wiki/DIVINE?oldid=4257994"
*Disclosure: Some of the links above are affiliate links, meaning, at no additional cost to you, Fandom will earn a commission if you click through and make a purchase. Community content is available under CC-BY-SA unless otherwise noted.