View source
watch 02:34
Fire Emblem Warriors: Three Hopes - The Loop
Do you like this video?
Play Sound
This article is about the set. For the card, see Cyberdark Impact!.

Cyberdark Impact is a Booster Pack in the Yu-Gi-Oh! Official Card Game (OCG) and Yu-Gi-Oh! Trading Card Game (TCG). It is the second set in the OCG's fifth series, following Power of the Duelist. It is followed by Strike of Neos.

The set contains many of the latest cards from the Yu-Gi-Oh! GX anime. It includes cards used by Zane Truesdale and Chancellor Sheppard, as well as strategies focusing on A-Counters, Chain Links, the "Cyberdark" series, "LV" monsters and restrictions on Special Summoning. It features the first cards with effects dependent on which column cards are in and the ability to move cards from one zone to another.

In the OCG, there are 5 cards per pack and 30 packs per box. There are 60 cards in total, 11 of which are also available in Ultimate Rare. This includes:

In the TCG there are 9 cards per pack and 24 packs per box. The set contains 60 cards, 25 of which were also available in Ultimate Rare. This includes: 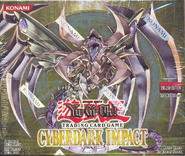