A criminal mark is a special variety of facial tattoo given to criminals who have committed crimes in New Domino City or to fugitives in the Yu-Gi-Oh! 5D's series and in the New Domino City of the Synchro Dimension in Yu-Gi-Oh! ARC-V.

Usually, people with these marks are sentenced to live in Satellite to serve their time working in the factories. If they have broken stricter laws (such as trespassing into New Domino City without authorization), they are sent to the Facility. These marks serve various purposes, like identification of people with criminal records or tracking fugitives down in case they escape or commit further crimes.

Criminal marks are placed on the offender using a laser that carves a unique shape on the offender's face. (The process stings at most, as Yusei is notably showing shock instead of pain) In the dub, the carving is replaced with a tattoo of radiophilic dye that creates a specific pattern unique to each criminal and cannot be removed. Additional criminal marks may be put on a criminal's face if that criminal commits repeated crimes. (Though this is ridiculous and overzealous as they have already been branded and their crimes recorded by Sector Security.)

Security trackers are used to find the location of a marked criminal by tracing the signal emitted by the mark. An individual criminal can be tracked due to the unique pattern of the tattoo. The criminal appears as a dot on a map.

The signal is known to be easy to jam as Yusei Fudo and Blister have been able to almost effortlessly jam criminal marks using a laptop or a small handheld device.

People with criminal marks are treated negatively (Very much like the social stigma regarding tattoo's in Japan today) by residents of New Domino City (In the dub, Luna said that her father once fired a pool cleaner simply because the pool cleaner had a criminal mark; it is implied that this sort of discrimination is normal in New Domino City, and that Luna's disapproval of it is considered a minority opinion. Leo was apprehensive to assist Yusei at first because of his status as a (former) criminal). During Yusei's first Fortune Cup match, the crowd was initially against him when it was shown that he had a criminal mark; it was only Yusei's dueling ability that enabled him to gain the crowd's approval. After the defeat of the Dark Signers, it appears that this discrimination has lessened. 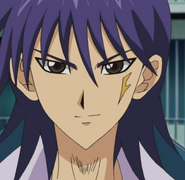 Jesse Wheeler
Add an image to this gallery

Sergey Volkov
Add an image to this gallery

Retrieved from "https://yugioh.fandom.com/wiki/Criminal_mark?oldid=4341801"
*Disclosure: Some of the links above are affiliate links, meaning, at no additional cost to you, Fandom will earn a commission if you click through and make a purchase. Community content is available under CC-BY-SA unless otherwise noted.