Creator God ( Sōzōshin) is an exclusive Type, used only by the DIVINE monster "Holactie the Creator of Light". Its exclusive distribution implies a greater importance over other DIVINE cards, namely the Egyptian Gods.

"Holactie the Creator of Light" appears in the Yu-Gi-Oh! anime and manga, summoned by Atem once he declared his name and combined all three Egyptian Gods ("Obelisk the Tormentor", "Slifer the Sky Dragon" and "The Winged Dragon of Ra"). 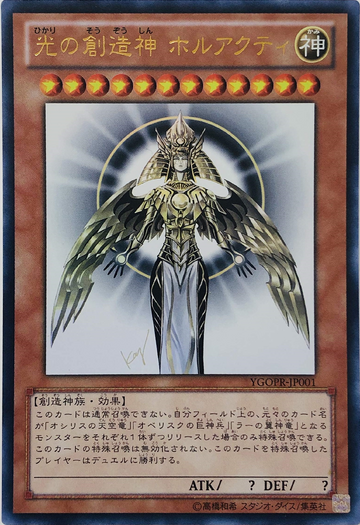 Retrieved from "https://yugioh.fandom.com/wiki/Creator_God?oldid=4026383"
*Disclosure: Some of the links above are affiliate links, meaning, at no additional cost to you, Fandom will earn a commission if you click through and make a purchase. Community content is available under CC-BY-SA unless otherwise noted.