A counterfeit card is a fake trading card. Most counterfeit cards in the context of Yu-Gi-Oh! are made to mimic those of OCG or TCG cards. Counterfeit cards are usually made with the sole purpose of selling them as authentic cards to make a profit, which distinguishes them from fanmade cards, which are sold as art, but not as genuine cards.

Many counterfeit cards can be easily recognized by flaws such as oddly colored or low-quality card backings and artworks, poor grammar in card names, effects, and other card text, and may use the wrong font or be incorrectly sized.

As the first set in the TCG, Legend of Blue Eyes White Dragon is a very popular booster pack set. As such, counterfeits have appeared throughout the years. An infamous counterfeit print of 1st Edition booster boxes are well known for the quality of their mimicry. Notable flaws specific to this print include:

In 2008, Konami sued Upper Deck Company, the worldwide manufacturer of the TCG, who were producing counterfeit cards for a company named Vintage Sports Cards, who had been repackaging these cards with genuine products.

A fake "Eradicating Aerosol". Note the unusual font and ATK/DEF values on what should be a Spell Card.

The only cards with official Chinese releases were "Blue-Eyes White Dragon" and "Dark Magician", until the debut of Traditional Chinese OCG sets in 2014.

These fake cards are missing the Eye of Anubis Hologram.

Counterfeit cards with artwork from existing cards but with different names and text.

A fake "Dragon Treasure" in Arabic. 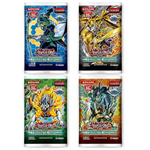 Fake Booster Packs recently being sold.
Add an image to this gallery

Retrieved from "https://yugioh.fandom.com/wiki/Counterfeit?oldid=4242141"
*Disclosure: Some of the links above are affiliate links, meaning, at no additional cost to you, Fandom will earn a commission if you click through and make a purchase. Community content is available under CC-BY-SA unless otherwise noted.