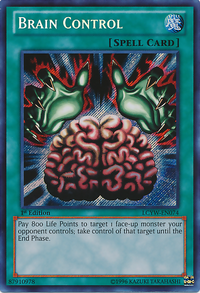 Control (Japanese: コントロール kontorōru) refers to the side of the field a card is on. The card's controller is distinct from its owner.

By default, cards remain under the control of their owners, but several cards can change control of cards, such as "Change of Heart", "Brain Control", "Mind Control", ""Creature Swap" and "Enemy Controller". When a monster switches control, it is placed on the new controller's side of the field. The new controller of the card choose the appropriate Zone the card would be placed on.

Some monsters, such as "Mataza the Zapper" and "Blindly Loyal Goblin", cannot change control.

If a monster is treated as an Equip Card, it is moved to the Spell & Trap Card Zone of the player who controls the effect that caused it to be treated as one, and thus that player becomes its controller. For example, if "Relinquished" takes control of an opposing "Ryu-Kishin", it is placed in the Spell & Trap Card Zone of the controller of "Relinquished". Monsters that cannot change control cannot be equipped to monster in a way that would change their controller.

Changing control only takes place when the monster is on the field. A monster Special Summoned from the opponent's hand, Deck, Graveyard, or Banished Zone; such as by the effects of "Grapha, Dragon Lord of Dark World", "Conscription", "Goyo Guardian" and "Leviair the Sea Dragon", respectively; is not considered to change control.

If a control of a monster in an Extra Monster Zone changes to the other player, it will go to the new controller's Main Monster Zone instead. When a card leaves the field, is returned to the Main Deck, or is detached, it is moved to the owner's hand, Main Deck, Extra Deck or Banished Zone (depending on where the card would be sent), regardless of controller.