The Nummer Number 17: Leviathan Dragon Collectible Tin features one of the first black-framed Xyz Monsters. This terror from the deep is easy to Summon, you just need 2 Level 3 monsters on the field. It starts off at 2000 Attack Points, but can instantly increase to 2500, then to 3000 ATK on the following turn! The best strategy is to combo this card with your Level 3 monsters that have effects you can only use once. After you’ve gotten what you need from those monsters, “Number 17: Leviathan Dragon” gives you an easy way to turn those used-up Level 3 monsters into a Dueling powerhouse!

The Wind-Up Zenmaister Collectible Tin features another early Xyz Monster. This clockwork commander requires just 2 Level 4 monsters to Xyz Summon. Once on the field, you can use its Xyz Materials to flip your monsters face-down, then face-up again. This is a great way to get multiple shots out of your Flip Effect Monsters, or to re-use the effects of your Wind-Up monsters from Generation Force and other booster pack sets, or to get rid of any nasty effects your opponent has put on your monsters.

Whether you’re picking this up for yourself or shopping for a Duelist you know, this is a money-saving opportunity that you literally cannot afford to miss.

In addition, each tin type includes a different set of five promotional cards: 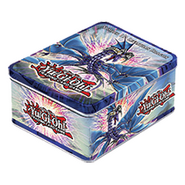 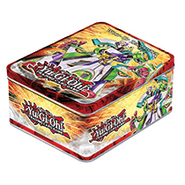 Wind-Up Zenmaister Tin
Add an image to this gallery