Here comes the second wave of Collectible Tins 2010! These two metal tins feature two new monsters of Yu-Gi-Oh! 5D’s: “Shooting Star Dragon” and “Red Nova Dragon”!
Make a wish! “Shooting Star Dragon”is is the latest upgrade to Yusei’s famous “Stardust Dragon” and just about to bolt across the night sky, right into your Deck! This cosmic Tin, illuminating the spectacular blue voids of deep space, is a great way to store your Decks, your favorite cards, or anything else you want to keep safe!
“Red Nova Dragon” is an upgraded version of another Synchro Monster: “Red Dragon Archfiend” and glows with all the intensity of an exploding star! You could probably see it from across the galaxy. But no need to travel that far, because now you can add this Synchro Monster to your Extra Deck with this fiery Tin!

North American and French "Shooting Star Dragon", and all German and Italian tins

In addition, each tin type includes a different set of five promotional cards: 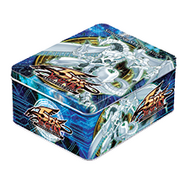 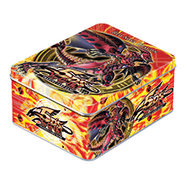 Red Nova Dragon Tin
Add an image to this gallery