The Yu-Gi-Oh! TCG Collectible Tins feature the most popular and powerful monsters on a sleek and sturdy protective metal case, so Duelists can store their favorite Deck or collection. The first of 2 waves of Tins kicks off with the twin releases of the Twins’ Dragons – Leo’s “Power Tool Dragon” and Luna’s “Ancient Fairy Dragon”! From Raging Battle and Ancient Prophecy, these two powerful dragons pack quite a punch and make a great addition to any Duelist’s Synchro Deck. These dragons are some of the most prominent and beloved monsters featured on the Yu-Gi-Oh! 5D’s animated series, and will feature prominently in the storyline well into 2010.

In addition, each tin type includes a different promotional card: 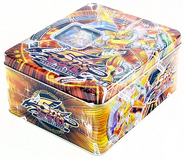 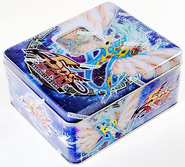 Ancient Fairy Dragon Tin
Add an image to this gallery