Cecelia Pegasus, known as Cyndia in the manga and Japanese anime and Cindy in the Odex dub of the anime, was Pegasus' lost love. She was noted for her beautiful face and soul, as evidenced by Pegasus' flashbacks of her.

Cecelia was Pegasus' childhood sweetheart. They first met at a party thrown by his businessman father in Las Vegas fourteen years before Duelist Kingdom. Cecelia and Pegasus were married and Pegasus, an artist at the time, constantly drew pictures of his love.

However, Cecelia died of a disease shortly after their wedding at the age of 17, this prompted Pegasus to search for a way to bring her back, ultimately culminating in his acquiring of the Millennium Eye from Shadi. Pegasus' feelings towards his beloved were eventually revealed to Yugi Muto and his friends after they found Pegasus' diary, which displayed his emotions. His reason for the cruel methods he put Yugi and his friends through to acquire Kaiba Corp was to use it to create a hologram of Cecelia. In the English dub, the reason was to combine the power of the Millennium Items with Kaiba Corp's holographic technology to bring Cecelia back to life. 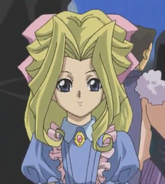 Cecelia as a child

Cecelia & Pegasus getting married at 17

*Disclosure: Some of the links above are affiliate links, meaning, at no additional cost to you, Fandom will earn a commission if you click through and make a purchase. Community content is available under CC-BY-SA unless otherwise noted.
... more about "Cecelia Pegasus"
RDF feed
Anime appearances
Yu-Gi-Oh! (anime) +
English name
Cyndia +  and Cecelia Pegasus +
Gender
Female +
Japanese translated name
Cyndia +
Advertisement