View source
watch 02:59
Wiki Targeted (Games)
Do you like this video?
Play Sound
For the manga version of this character, see Ghost Kozuka (manga).

Bonz, known as "Ghost" Kotsuzuka in the Japanese version, "Ghost" Kozuka in the English manga and "Ghost" Bonz in the Singaporean dub of the anime, is one of Bandit Keith's former lackeys. Bonz's ghastly appearance is said to be caused by a glandular problem.[1]

In the Japanese version he tends to make references to his opponents' death or just death in general.

In the Duelist Kingdom tournament, he along with Sid and Zygor were Bandit Keith's henchmen after he agreed to share his expertise with the young Duelists so that all four of them would advance to the finals. Keith wanted revenge against Maximillion Pegasus for humiliating him in the final match of the Intercontinental Championship. In secret, Keith merely wanted to use them for their Star Chips. Under Keith's tutelage, all three Duelists win Duels on the first day of the tournament, with Bonz at a total of four Star Chips. When Keith learned that Yugi Muto, Joey Wheeler, and their friends had entered the tournament as well, he believed they would impede them, and sought to eliminate them. Bandit Keith later found a secret Graveyard field, and chose Bonz to play in it because it suited his Ghost Deck. Because Keith was initially unimpressed by Bonz's Deck, he lent Bonz some of his own cards to improve it, including his trump card, "Call of the Haunted".

Meanwhile, Sid and Zygor looked for Joey, believing him to be an amateur. When Joey ran away from the group towards a waterfall, Zygor beat him unconscious. Joey woke up in cave with a Dueling Arena, complete with a Graveyard field. Bonz challenged Joey to a Duel and tricked him into thinking that he must accept. Bonz had the upper hand, as his Zombie-Type monsters gained a 30% ATK bonus from the Graveyard Field, and when they were destroyed, they just regenerated, and gained ATK from "Call of the Haunted". However, when Yugi and their friends arrived, Joey managed to figure out the Zombies' main weakness; that their DEF is 0. Joey used "Shield and Sword" to switch their ATK and DEF values, and won the Duel. Bandit Keith then locked them in, beat up his three companions, took their remaining Star Chips, and entered the Duelist Kingdom Finals himself, having abandoned the three, saying that they had outlived their usefulness to him.

Bonz, along with Sid and Zygor, were then seen right before the Battle City finals. The three stayed in a nearby cemetery and tricked people into giving up their Locator Cards. However, Yami Bakura was not intimidated by their act and challenged them to a Duel in which the winner takes all the Locator Cards, and thus may enter the Battle City Finals directly. Bonz had the advantage at first, but Bakura won quickly after. He then banished them to Hell (the Shadow Realm in the English dub). It was never known in this series if they were ever released from their imprisonment.

In Yu-Gi-Oh! 5D's, a parody of him named Ghost Takarazuka is listed as one the Duelists defeated by Hunter Pace.[2]

Bonz is seen in Yu-Gi-Oh! Nightmare Troubadour for the Nintendo DS. He has again a Deck made up of Zombies and support cards. He is ranked as 'Feeble'. 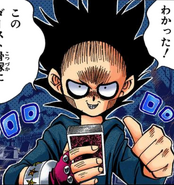 Bonz (Legacy of the Duelist)

Bonz uses a Zombie Deck. During Duelist Kingdom his Deck was enhanced with cards given by Bandit Keith, who coached Bonz for much of his Duel with Joey. The Deck relied on Keith's "Call of the Haunted" to revive the non-Zombie monsters placed in Bonz's Deck as Zombie-Types, making them immortal and boosting their ATK whenever they were destroyed. Bonz further enhanced them with "Pumpking the King of Ghosts".

In Battle City, Bonz used "Great Mammoth of Goldfine" and a handful of new undead-themed cards such as "Nightmare's Steelcage" and "Skull Invitation", but was outmatched against Yami Bakura's Occult Deck. When Seeker was looking up a Duelist's rarest cards on his laptop, "Call of the Haunted" was still listed as his rarest card.

The Duelists of the Roses

Bonz (as Necromancer) plays a Zombie Deck. All his monsters are powered by the Wasteland terrain. His Deck Leader, "Pumpking the King of Ghosts" increases the ATK of all his Zombies near him by 500. The Pumpking in his Deck allows gives his monsters a 100 ATK boost each round.

Bonz's signature card is shown to be Crass Clown, despite him not using it in the game.

The Dawn of Destiny
Monsters