Bob McGuire (ボブ・マクガイア Bobu Makugaia) is a character in the Yu-Gi-Oh! manga. McGuire was hired by Seto Kaiba to face Yugi Mutou in a shootout game.

McGuire was hired for the Death-T theme park at Kaiba Land, which was created to kill Yugi Mutou. He was put on a team with Johnny Gayle and "name unknown" to face Yugi and his friends in the first stage of Death-T. Each of them were promised a bounty of ¥10,000 for each opposing player they killed.[1]

Kaiba rigged the game so that the three men on his team had real lasers that cause fatal electric shocks when fired, while Yugi and his friends were given toy guns.[1]

When the three mercenaries discussed how they should take out their opponents, Gayle suggested that they leave it to him, as he was the expert in guerrilla warfare. As Gayle moved out, McGuire accused him of showing off and wanting the bounty all to himself.[2]

Katsuya Jonouchi took out Gayle, by kicking him in the face, after running along the tops of the walls. Seeing this, McGuire and name unknown began shooting at Jonouchi. With Jonouchi acting as a decoy, Hiroto Honda used the chance to shoot at McGuire, hitting the sensor in his cyber vest head on, but to no effect. Realizing that his team's guns did not work, Honda called Yugi and Jonouchi back for a timeout.[2]

After the timeout, Honda came on to the battlefield, offering a surrender. McGuire explained that it would not happen as they have been paid to kill him. Johji, who was hiding on Honda's back, tossed him Anzu's operational gun, which Honda used to take-out McGuire and name unknown.[2] Since Honda had previously set the laser to a non-lethal voltage, they were not killed.[2] 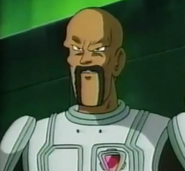 *Disclosure: Some of the links above are affiliate links, meaning, at no additional cost to you, Fandom will earn a commission if you click through and make a purchase. Community content is available under CC-BY-SA unless otherwise noted.
... more about "Bob McGuire"
RDF feed
English name
Bob McGuire +
Gender
Male +
Advertisement