View source
watch 02:52
Roblox: DeepWoken - The Loop
Do you like this video?
Play Sound
For the manga version of this character, see The White Dragon (manga).

Blue-Eyes White Dragon is a character version of the card, "Blue-Eyes White Dragon". Although the duel monsters card is powerful in its own right, the actual monster spirit is incredibly powerful, being one of the most powerful monsters in the Yu-Gi-Oh! universe, even rivaling that of the Egyptian Gods Obelisk the Tormentor and Slifer the Sky Dragon.

Blue-Eyes White Dragon was the monster ka spirit of Kisara, although it only emerged while she was in an unconscious state.

With Kisara captured, Aknadin heard of the Dragon's power and hoped to transfer the ka to his son Seto, unconcerned that this would mean killing its current host. The imprisoned Kisara was unaware of her ka and thus unable to summon it. Seto, disgusted at the idea of using her without regard to her life, attempted to save her. He failed, and both their lives fell into danger. However, Kisara lost consciousness, causing the White Dragon to emerge and ultimately resulting in their rescue.

Seto had come to care deeply for Kisara during this time. He defended her until her death at the hands of Aknadin, who proceeded to possess his son. Perhaps showing that she felt the same about him, Kisara's spirit entered Seto's mind and destroyed Aknadin, freeing the young priest. Afterwards, Seto extracted the White Dragon ka and used it to fight Zorc Necrophades.

According to Kazuki Takahashi, Seto's feelings for Kisara are the reason behind Seto Kaiba's modern-day obsession with the Blue-Eyes White Dragon.

Despite being always called "Blue-Eyes White Dragon", or even simply just the "White Dragon", Blue-Eyes always has a light blue body as well as blue eyes. Later card designs also clearly showed the dragon to be blue rather than white.

"Blue-Eyes White Dragon" was made a four-of-a-kind Duel Monsters card.

With the great repute that a single "Blue-Eyes White Dragon" has gained on its own, Seto Kaiba became very obsessed with them. After going through great length to gain a full set of 3 copies for his own Deck, believing that only he was worthy of wielding such a card, he continued to search for the last copy.

At some point, Arthur Hawkins obtained the final copy. Later, he gave his most prized card to Solomon Muto in gratitude for saving his life. When Kaiba learned Solomon owning the final "Blue-Eyes White Dragon", he first aggressively offered a trade of an entire suitcase of extremely rare cards and even a large sum of money. When Solomon declined either offer, Kaiba challenged Solomon to a duel for it. Immediately upon winning the duel and claiming Solomon's most treasured card, he casually ripped it in half, destroying its playability to leave himself as the only user of "Blue-Eyes White Dragons" in the world.

Despite this, Solomon chose to keep the card, still valuing it as a priceless keepsake that he got from his best friend, going so far as to crudely tape it back together.

In Yu-Gi-Oh! The Falsebound Kingdom, the 3 Blue-Eyes White Dragons are named Azrael, Ibris, and Djibril. 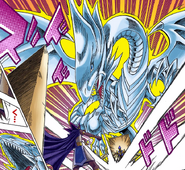 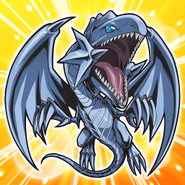 *Disclosure: Some of the links above are affiliate links, meaning, at no additional cost to you, Fandom will earn a commission if you click through and make a purchase. Community content is available under CC-BY-SA unless otherwise noted.
... more about "Blue-Eyes White Dragon (character)"
RDF feed
Anime appearances
Yu-Gi-Oh! (Toei anime) +  and Yu-Gi-Oh! (anime) +
Corresponding card
Blue-Eyes White Dragon (anime) +
Advertisement