watch 02:45
Wiki Targeted (Games)
Do you like this video?
Play Sound
This article is about the game structure. For the tournament structure, see Battle royal (tournament).

A Battle Royal (バトル・ロイヤル, Batoru Roiyaru) is a game of Duel Monsters involving more than 2 sides.

The rules of a normal Duel apply, but a number of changes are made to accommodate multiple players. The following characteristics are common in this kind of Duel:

This type of game has been carried out multiple times in the anime and manga series.

From episode 106 to episode 107, Nesbitt Duels Tristan Taylor, Duke Devlin and Serenity Wheeler at once. Despite the fact that Tristan lost, his cards were still on the field and their effects were still applying.

From episode 122 to episode 124, Yugi Muto, Joey Wheeler, Seto Kaiba and Yami Marik faced each other in a Battle Royal to determine the match-ups for the finals of the Battle City tournament.

The Duel from episode 92 featured Maximillion Pegasus facing off against Vellian Crowler and against Jean Louis Bonaparte.

In the episodes from 122 to 130, Duels in Battle Royal mode occured against the Duel Ghouls.

In the episodes 175 and 176, Yusuke Fujiwara Dueled like this while trying to defeat Jaden Yuki and Jesse Anderson.

In episode 62 to episode 64, Rex Goodwin Duels Yusei Fudo, Jack Atlas and Crow Hogan, with Goodwin starting with 12,000 LP. It is also a Turbo Duel, even though Goodwin doesn't ride a Duel Runner and stands on the top of a temple, but he uses the Turbo Duel rules against his opponents.

In episode 86, when Yusei Fudo Dueled against three thugs, the Battle Royal rules are used.

In episode 106, Primo's army of Ghosts, named "Diablo", invaded the WRGP and began to start Duels in Battle Royal mode with all the contestants present.

In episode 139 to episode 140, Sherry LeBlanc tricks Crow Hogan and Akiza Izinski into fighting one another using these rules.

In episode 141 to episode 143, when Aporia Duels against Jack, Leo and Luna, the Battle Royal rules are used.

In episode 33, featured Quattro facing off against Caswell Francis and against Bronk Stone.

From episode 51 to episode 53, Duels were carried out using the Battle Royal rules for the World Duel Carnival finals aboard the Duel Coaster.

In episode 87, the Duel of Girag, Yuma and Ray Shadows utilized the Battle Royal rules.

From episode 112 to episode 117, the Duels against the Fearsome Four of the Dark Dueling World were carried out using these rules.

In episode 131, the Duel of Vector, Marin and Dumon is conducted through the Battle Royal rules.

In episode 138, the Duel of Don Thousand, Yuma and Nash is conducted through the Battle Royal.

In episode 36, Yuya Sakaki joins the Duel between Sora Perse and Yuto, turning the Duel into a Battle Royal.

Between episodes 42 and 49, the third round of the Junior Youth division of the Arc League Championship was conducted as a Battle Royal. All of Paradise City was subject to the "Quartet of Quandry" Action Field, and the goal for each of the sixteen participants was to collect as many "Pendulumstatue" Pendulum Monsters as possible within 24 hours. Each participant could not duel another unless they wager such "Pendulumstatue" monsters as per the ante rule. During the Battle Royal, invaders from the Fusion Dimension arrived at Paradise City, as predicted by Declan Akaba; participants instead ended up dueling those invaders, with those losing being sealed in cards.

In episode 103, a Battle Royal started between Alexis Rhodes and 3 Juvenile Officers.

In episode 136 to 140, a Battle Royal between Lancers and Allies against Z-ARC. 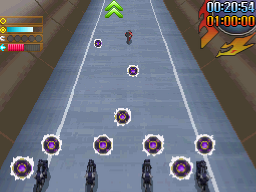 In Yu-Gi-Oh! 5D's World Championship 2011: Over the Nexus, Primo unleashes the Diablo army, which attack the player in a fashion similar to the anime. However, instead of engaging in a free-for-all Duel, the player has to dodge the numerous Ally Salvos launched by the Ghosts for a set time. Afterwards, Battle Royal mode is available in the race simulator.

In Battle Royal mode in the video game, top speed and acceleration of the Duel Runner mean next to nothing. The player must survive for a set 90 seconds while dodging the attacks from Ghosts and picking up any items along the way. Accelerating will only move the player further up the screen, while braking does the opposite. Using a booster will allow the player to temporarily outrun the Ghosts and remain unattacked for a few seconds. Rank is determined not by how long the player survives nor how much the player is damaged, but how many items are picked up along the way.

Retrieved from "https://yugioh.fandom.com/wiki/Battle_Royal?oldid=4245944"
*Disclosure: Some of the links above are affiliate links, meaning, at no additional cost to you, Fandom will earn a commission if you click through and make a purchase. Community content is available under CC-BY-SA unless otherwise noted.