Battle Pack: Epic Dawn is the first set in the TCG exclusive Battle Pack series, specifically designed for sealed play. It is followed by Battle Pack 2: War of the Giants.

Each of the cards included in the set was specifically selected to enhance the experience of sealed pack play. To ensure that all Decks have an even selection of various effects and monsters with high/low ATK, the set is split into four distinct groups:[1]

"Gem-Knight Pearl" and "Backup Warrior" were made TCG-legal with the advent of this set, having been OCG exclusive cards before.

All Rare cards in the set have a glossy white or glossy black card title, similar to Duelist League Rare cards, rather than the usual silver holofoil. 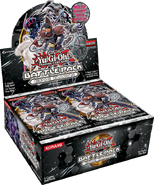 English box
Add an image to this gallery