Start a Wiki
This article is about the device. For the crystal itself, see Baria Crystal.

A Baria Crystal, known as Varialapis (バリアラピス Bariarapisu) in the Japanese version and a portmanteau of "Barian" and "lapis" (Latin for jewel), is an item possessed by Barians while in human form. It is a technological device made from Baria Crystals. It allows Barians to still access some of their powers while on Earth and allows them to Barian Battlemorph. If the device is broken, they become stuck in human form.[1]

Each Baria Crystal is slightly different, some are worn as necklaces and armbands, others are summoned by the users themselves. Only Nash's and Marin's take the form of the Barian Emblem itself. Consistent across all of them is a red Baria Crystal, which is also integrated into the body of each of their Barian forms.[2] When Dumon held Shark's hand to save him, Shark and his body glowed with Barian aura around them, resulting in the repairing of Dumon's Baria Crystal.[1] 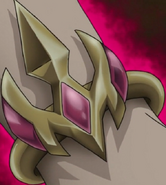 Vector
Add an image to this gallery

Retrieved from "https://yugioh.fandom.com/wiki/Baria_Crystal_(jewelry)?oldid=3890665"
*Disclosure: Some of the links above are affiliate links, meaning, at no additional cost to you, Fandom will earn a commission if you click through and make a purchase. Community content is available under CC-BY-SA unless otherwise noted.