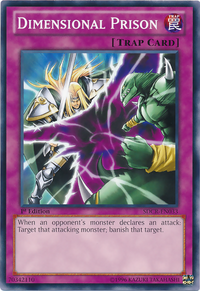 Banish (Japanese: Jogai, lit. "exclude"), known as remove from play prior to the Problem-Solving Card Text update, is a term used to describe the act of making a card banished, causing the card to leave its current location. Banished cards are not in any particular zone. Cards can only be banished by a card that uses the word "Banish" (or older terms).

Banishing a card(s) causes them to leave the field, and is stacked face-up (by default, unless stated otherwise). The number of Banished cards is Public knowledge. Banishing a card also does not specify the place the card(s) will end up.

In addition to normal face-up banishes, several cards can banish cards face-down. Cards banished face-down is not public knowledge, and can thus only be looked at by its possessor. They are unaffected by cards that specify properties of the banished card, other than the card that banished it.

If an effect that banish temporarily targets a face-down card, the target will be banished face-down, and will return to the field face-down.

Retrieved from "https://yugioh.fandom.com/wiki/Banish?oldid=3964292"
*Disclosure: Some of the links above are affiliate links, meaning, at no additional cost to you, Fandom will earn a commission if you click through and make a purchase. Community content is available under CC-BY-SA unless otherwise noted.