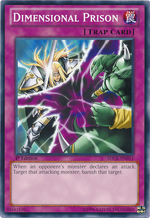 In addition to normal face-up banishes, several cards can banish cards face-down. Cards banished face-down are not public knowledge, and any of its properties cannot be specified.

If a card controlled by a player that is not its owner is temporarily banished by a card like "Interdimensional Matter Transporter", it will be in the owner's possession, but it will return to the player who control it when it was banished. However, if the effect that gave temporary control of that card to the opponent is no longer active, it will then return to the original owner.[1]

Thematically, cards which banish tend to either imply that the card's soul is being removed (e.g. "Kycoo the Ghost Destroyer", "Bazoo the Soul-Eater") or are sent to another dimension (e.g. the "D.D." series).