Bandit Keith is a playable Legendary Duelist in Yu-Gi-Oh! Duel Links. This is a video game depiction of Bandit Keith, a character from the Yu-Gi-Oh! anime.

He only appears in-game after the player claims his Character Unlock Mission reward for defeating Legendary Duelists 50 times.

Red Gate Keys are required to Duel Bandit Keith at the Gate.

Intercontinental champion Bandit Keith has no qualms about using underhanded tactics to steal the win. His signature monster "Barrel Dragon" has an effect that enables it to destroy his opponent's card.

Immediately after the player claims the reward for Bandit Keith's appropriate Character Unlock Mission, they will encounter Bandit Keith for the first time. He remarks to himself that this is the Duel World that the "Kaibacorp dweeb" created, before declaring that Kaiba's a fool; he can't believe that he can Duel all he want in Duel World for free, saying that he himself would charge a "bazillion." Bandit Keith then reveals that he's not interested in becoming the Duel World King, unless there's a cash prize involved, whereupon he reasons that there should be a "ransom of riches" for the Duel World King. Even if there isn't, he continues, he can steal the data in this world and sell it to the highest bidder. He then chuckles, before bursting into arrogant laughter.

Until the player defeats Bandit Keith for the first time, whenever they challenge Bandit Keith to a Duel, he will first chuckle, and then state the player must be joking, before rhetorically asking the player if they really think they can beat a genius like him. He goes on to exclaim that they don't need to Duel, as even the player knows that Bandit Keith is going to beat him to a pulp. He then tells the player to face facts - they're getting "thumped," before laughing and then telling the player, "Step right up to get smacked down!"

Until the player manages to defeat Bandit Keith at least once, whenever they lose to him, Bandit Keith will declare this is why he's the champ and the player is the chump, as the player is a "dweeb" who doesn't have either the cards or the tactics to take him down. He then chuckles, before revealing to the player that although he sometimes cheats to win, he didn't need to in their Duel since the player was incredibly weak, concluding his dialogue in laughter.

Upon Bandit Keith's first defeat, he initially seems to downplay his loss, before suddenly blaming Kaiba - he would have won if Kaiba hadn't "rigged" the rules against him. He then swears that he'll show "all you punks" that he'll get the last laugh, concluding his dialogue in laughter.

After the player redeems their final unclaimed reward for Bandit Keith's Character Unlock Missions, they will encounter Bandit Keith again, who asks the player if they've ever risked everything they cherish - their dreams, their cards, or even their life. He then explains that he only asks this because he himself has, which taught him a real lesson: if you aren't willing to risk everything, then you're worth nothing. He promises he'll never be worth nothing, which is why the player has no clue what he'll do to reach the top, such as him using "Barrel Dragon" (which he shows to the player). He then chuckles, asking the player how it feels for them to be in the sights of "Barrel Dragon", before bursting into laughter. 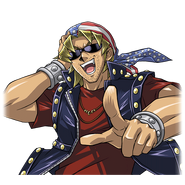 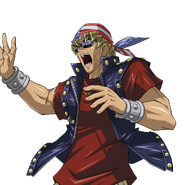 Set Sail for the Kingdom

Skill: "Triple 7" (Once per turn, Bandit Keith can add "7 Completed" to his hand before his normal draw. He can use this effect up to 3 times per Duel.)

Skill: "Double Sided Coin" (All coins will be flipped heads.)

The following lists are the rewards the player accumulates from having Bandit Keith reach a certain Level.

When dueling against Level 40 Bandit Keith, these are the only cards that can drop; at lower levels, cards from the standard pool for Legendary Duelists may also drop.

Retrieved from "https://yugioh.fandom.com/wiki/Bandit_Keith_(Duel_Links)?oldid=4380823"
*Disclosure: Some of the links above are affiliate links, meaning, at no additional cost to you, Fandom will earn a commission if you click through and make a purchase. Community content is available under CC-BY-SA unless otherwise noted.
... more about "Bandit Keith (Duel Links)"
RDF feed
DULI Deck
Bandit Keith Deck +, US Champ's Tryouts +, US Champ's Machines +, US Champ's 6 Blasters +, US Champ's Elite Machine +, Rogue Machines +, Mechanical Technique +  and Graveyard Gunfire +
English name
Bandit Keith +
Gender
Male +
Video game appearances
Yu-Gi-Oh! Duel Links +