Astral glyphs are the writing system used by those in Astral World in the Yu-Gi-Oh! ZEXAL anime.

In reality, the glyphs are a cipher of Japanese. With the exception of numbers and a few special characters, each glyph is a stylized version of a katakana. A word written in Japanese phonology can be converted to Astral glyphs, by converting each syllable of the word to its katakana and then replacing each katakana with its corresponding Astral glyph. The long vowel marker, "ー", is replaced with the vowel it is prolonging. The syntax of the first line of an Xyz Monster's card text is: <required Attribute><number of stars equal to the monster's Rank> × <number of a digit which identifies the number of Xyz Materials, equal to the number of Xyz Materials>; for example, the material requirements for "Number C39: Utopia Ray" would be written as: ヒカリ／☆☆☆☆ × ３３３.

Each number is represented by a ten spoked wheel, with a dot outside. Counting the number of spokes clockwise from the top of the circle, until the dot is reached gives the number it represents.

The following cards have been shown in Astral glyphs. 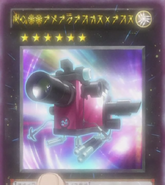 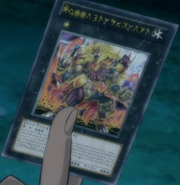 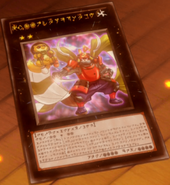 Number 83: Galaxy Queen
Add an image to this gallery
Retrieved from "https://yugioh.fandom.com/wiki/Astral_glyphs?oldid=4355052"
*Disclosure: Some of the links above are affiliate links, meaning, at no additional cost to you, Fandom will earn a commission if you click through and make a purchase. Community content is available under CC-BY-SA unless otherwise noted.