watch 02:45
Wiki Targeted (Games)
Do you like this video?
Play Sound

Arkana is a playable Legendary Duelist in Yu-Gi-Oh! Duel Links. This is a video game depiction of Arkana, a character from the Yu-Gi-Oh! anime.

Prior to May 11, 2018, he was exclusive to the special event Duelist Chronicles: Battle City Begins!, only being able to be dueled or unlocked during the event.

Red Gate Keys are normally required to Duel Arkana at the Gate.

One of Marik's nefarious Rare Hunters. Arkana believes he is the one true Master of Magicians. He has no qualms about harming his own cards - as long as it guarantees him a victory. During Battle City, Arkana faced Yami Yugi in a clash of Dark Magicians - where one mistake could lead to an eternity in the Shadow Realm.

Picking up where the manga left off, Arkana initially believes to have beaten Yugi after waking up alone with no recollection of the conclusion of their duel. Marik's punishment involved trying to convince him to commit suicide by stirring up painful memories of his past. Despite the sadness implemented in him from Marik's brainwashing, he resolves to use his persona to mask his true feelings and pursues his own ambitions. Arkana was so elated to have survived that he was able to suppress the pain. Some time later, Arkana entered the world of Duel Links.

When Yami Marik returned, Arkana rejoined the Rare Hunters, but was defeated and sent to the Shadow Realm. Arcana was later released once Marik's reign of terror came to an end. 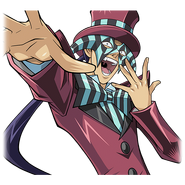 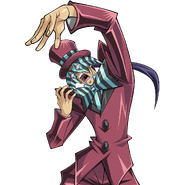 Skill: "Master of Trickery" (If your team has less than 2000 Life Points, set one "Dark Renewal" from outside the deck.)

The following lists are the rewards the player accumulates from having Arkana reach a certain Level.

When dueling against Level 40 Arkana, these are the only cards that can drop; at lower levels, cards from the standard pool for Legendary Duelists may also drop.