Ancient Sanctuary is a Booster Pack, which is a combination of the Japanese sets The Sanctuary in the Sky and Pharaoh's Inheritance.

This series is the last mainstream Booster Pack in the TCG, Asian-English and Korean, prior to their convergence with the Japanese Booster Pack releases. As such it is the last to follow the format of having 2 Secret Rare, 10 Ultra Rare and 10 Super Rare cards.

This is one of the two Booster Packs combined into Dark Revelation Volume 2.

Ancient Sanctuary focuses mainly on Fairy-Type monsters, including the "The Agent" monsters, which have powerful effects when the card "The Sanctuary in the Sky" is in play.

Yami Yugi's appearance on the cover of this booster pack is taken from the title page for Yu-Gi-Oh! Duelist Duel 148: "One-Turn Kill". This was also used earlier for Struggle of Chaos and Duelist Legacy Volume.5.

The set contains 112 cards. This is comprised of: 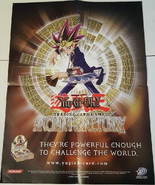