"Amazoness" (アマゾネス Amazonesu) is an archetype of female EARTH monsters that were introduced in Labyrinth of Nightmare, with further support in Magician's Force, Duelist Revolution, Legendary Duelists and Circuit Break. All of its members are Warrior monsters, except for the Beast "Amazoness Baby Tiger", "Amazoness King Liger", "Amazoness Pet Liger" and "Amazoness Tiger".

Mai Valentine, Tania, and the Tyler sisters (Gloria and Grace) have used "Amazoness" cards in the anime. These monsters are based on the Amazons from Greek mythology.

The Japanese name Amazonesu derives from the Greek Ᾰ̓μαζόνες Amazónes "Amazons", the plural form of Ᾰ̓μαζών Amazṓn "Amazon". It is construed as "Amazon" + "-ess" (feminine suffix) in TCG languages, except in German in which it is as "Amazon" + "-isch" ("-ish").

The "Amazoness" monsters have average ATK and effects and are designed either to weaken the opponent's monsters or strengthen themselves. Newer support relies on swarming and battle phase summoning. Key cards include "Amazoness Village", "Amazoness Paladin", "Amazoness Tiger", and "Amazoness Queen".

While their ATK is often weak for their Level, cards such as "Amazoness Tiger" and "Amazoness Paladin" increase in strength relative to the number of other "Amazoness" on the field. "Amazoness Trainee" increases in strength for every monster she destroys. "Amazoness Queen" protects all "Amazoness" monsters from destruction in battle, while "Amazoness Sage" can destroy one Spell or Trap Card at the end of each attack; with these two cards alone, a player can defend his or her monsters, while slowly dismantling an opponent's back row. 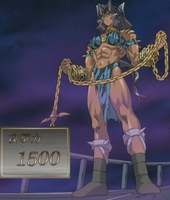 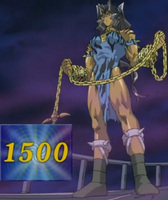 Common build strategies for this archetype include:

Massive field control comes at a cost. Most of Amazoness decks will always have trouble when fighting Decks with a strong focus of nullifying Spell and Trap Cards (Since many of their Spell/Traps are key points for their survivability, especially "Amazoness Village"). Amazoness decks also having a hard time to breakthrough Spells and Traps that can stop their attacks, like "Messenger of Peace", "Level Limit - Area B", and "Gravity Bind". Cards such as "Dust Tornado", "Mystical Space Typhoon", "Seven Tools of the Bandit", and Xyz Monsters can counter such plays.

Amazoness decks are also weak against decks that can either: outspeed them completely, like Mermails and Six Samurais, or decks that have more control and advantage-grinding quality, such as Prophecy, Gadgets, or even Dark World decks.

"Skill Drain" can be problematic to any Amazoness decks, due to most of their monsters either having Continuous Effects or effects that can only be useful while battling.

Over-reliance towards "Amazoness Village" makes this deck hard to maintain. Without it, this deck usually suffers from not having enough resources to maintain field presence, which Amazoness Village can provide. To remedy this problem, a player can either add more external support such as "Marauding Captain" and "Warrior Lady of the Wasteland", add more draw power via "Pot of Duality", "Reckless Greed", and/or "Shard of Greed", or add protection via "Safe Zone", "Forbidden Lance", and/or "Fiendish Chain". "Pot of Desires" is not recommended however as the deck has too many key cards that could be removed for good such as tuners for "Crystron Halqifibrax" or "Amazoness Baby Tiger".

Amazoness are almost totally dependant on "Amazoness Princess" and "Amazoness Call" to keep their plays going. Having these negated by an "Ash Blossom & Joyous Spring" or "Solemn Strike" can kill the deck instantly. Having "Amazoness Baby Tiger" banished or otherwise made unusable can also prove very problematic as it is a central card in any build of the deck. Banishing can prove fatal in general so cards like "Dimensional Fissure" can be game enders. Similarly, "Necrovalley" will prevent many of their plays functioning; although "Amazoness Onslaught" can help the deck win against a Gravekeeper deck.

Amazoness is a deck very reliant on its normal summons so having it negated via "Solemn Warning" or "Forced Back" can be disastrous as you may lose both a Princess search and a Baby Tiger. Similarly, it is also very reliant on the extra deck to make its powerful boards so having special summons stopped can slow down the deck massively. "Amazoness Onslaught" and/or "Amazoness Queen" can help to either get rid of problematic monsters such as Vanity's Fiend or outright win against a slower, stall deck.