Aknadin, known as Akhenaden in the manga and Japanese version, was the father of Priest Seto and younger twin brother to the former Pharaoh Aknamkanon, thus making him the uncle to Pharaoh Atem. Additionally, he was the first wielder of the Millennium Eye and was responsible for the creation of the Millennium Items.

His name corresponds to the real-life Egyptian pharaoh, Akhenaten, who reigned during the 18th Dynasty.

Creation of the Millennium Items

Aknadin was the advisor and brother of Pharaoh Aknamkanon. While he loved his brother dearly, he was secretly resentful of his brother for being Pharaoh while he was relatively unimportant. When Egypt was under attack, Aknadin pushed his brother to fight back and protect his people, but Aknamkanon refused on the grounds he wanted peace. Eventually the invading armies grew too close to the palace to be repelled, and Aknadin suggested using a spell from the Millennium Spellbook ("Millennium Tome" in the manga) to create the Millennium Items. Faced with the undeniable fact his kingdom may be destroyed, Aknamkanon agreed. It is later revealed in the manga that Zorc Necrophades had lured Aknadin (most likely with promises of his legacy obtaining the throne from his brother) to translate the Millennium Tome (hence the Shadow Alchemy and the events of Kul Elna) in order for him to be brought back into the world.

Prior to heading out, Aknadin abandoned his son Seto and his wife for fear his actions would later cause criminals to target them, as well as to shield them from prejudice. That night, Aknadin led a group of soldiers to the village of Kul Elna, where he ordered the thieves there killed, and their blood collected for the ritual to create the Items (in the English anime, the souls of the thieves are collected, although it is indirectly implied they are still killed). The sole survivor of this slaughter was a young boy named Bakura. The slaughter was so horrific that Aknadin never told his brother of it, and had all the soldiers he had taken brainwashed so as to forget the incident.

Aknadin succeeded in crafting the Millennium Items, but a chasm opened in the chamber where the ritual had taken place. Zorc Necrophades rose from the chasm and ensnared Aknadin, presumably to kill him. Aknadin gouged out his eye and placed the Millennium Eye into the socket, using its magic to protect himself and repel Zorc. On the journey back to the palace, all the soldiers but Aknadin fell, and only he survived. Upon the invading army's attack, Aknadin, his brother and five other priests used the Millennium Items to hold them at bay and defeat them.

Aknadin would later remain a member of the Sacred Court after his brother sacrificed himself and his son Atem took the throne. Aknadin also witnessed his son Seto's rise to power as a High Priest and holder of the Millennium Rod. Aknadin was amazed his son had made his way from peasant to priest despite him abandoning him, and spent all his spare time training Seto, although he never told him they were related. Both Seto and Atem were unaware that they were cousins, although if Atem knew Aknadin was his uncle or not is not addressed. Despite his outward personality of being loyal to the pharaoh and his kindness and mercy to criminals, Aknadin's inner jealousy caused him to desire Seto becoming the pharaoh more than anything else, and Aknadin would in truth despise his brother and nephew, who took the kingship that Aknadin desired for himself and his son. Despite the extremes he took, he did end up getting his wish, but ironically it came from Atem's own will and generosity. It is assumable that Aknadin was very happy about this and that his anger, envy and corruption, was finally laid to rest, since he no longer had a reason to feel those emotions.

In the Millenium World arc, when Thief King Bakura attacked the Royal Palace and accused Atem's father of slaughtering his village, the Sacred Court denied such claims, but Aknadin was horrified to realize Bakura must have survived the destruction, and as a result of the rage and evil that surely had taken root in him, the power of his Ka "Diabound" would be nearly limitless. Using the power of his Millennium Ring to get past the guards, Bakura would later attack Aknadin at the palace itself, and promise him Aknadin's dark side would be brought out.

Aknadin's jealousy towards his brother is exposed by Zorc and he eventually becomes convinced that his son should be Pharaoh instead. In an act that would ultimately lead to Atem's defeat (but not death), he attacked the stone tablet that housed Slifer the Sky Dragon, weakening it for Bakura to defeat it and cast Atem into a chasm.

Aknadin then had several prisoners, including the young girl Kisara, taken to a secret underground arena where he made them battle each other using their Ka. When Seto found him, Aknadin explained he (Seto) would be the next Pharaoh, and he was simply doing his duty to him by creating an army for him: by having the prisoners fight, their evil souls grew stronger and their ka more deadly. When Aknadin ordered Kisara to battle, Seto stepped in to save her at the risk of his own life, refusing to let Aknadin kill her or to extract her Ka, the White Dragon.

Aknadin accompanied the attack on Kul Elna, where he and Priest Shada found the tablet for Bakura's Ka Diabound. When Shada attempts to tell the other priests, Aknadin knocks him unconscious and takes his Millennium Key. During this time, Bakura had been defeated by Atem, Mahado (Mahad in the English anime) and Mana. Overseeing the events, Yami Bakura used a talisman to freeze time, while Aknadin collected the remaining Millennium Items from the incapacitated priests and placed them in the Millennium Stone to resurrect the Dark God Zorc Necrophades.

Upon his resurrection, Zorc Necrophades granted Aknadin a portion of his power, transforming him into the "Great Shadow Magus" ("High Priest of Darkness" in the manga and Japanese anime).

Aknadin then proceeded to tell Seto of his royal lineage, encouraging him to join him and rule the world with him and Zorc. Seto refused, and Aknadin attacked, only to be repelled when Hassan stepped in to protect Atem and the other Priests. During this time Yami Bakura used the power of the Millennium Items to revive Bakura and Diabound, who distracted the priests while Aknadin drew Seto into a portal to appear at the palace, where he had also teleported Kisara. Seto protected Kisara once again, and Kisara responded in kind by calling forth the White Dragon to battle Aknadin.

Aknadin sealed the White Dragon in stone before killing Kisara herself (Kisara's spirit is sealed with the White Dragon in the English dub). Seto responded by summoning the White Dragon himself to strike down Aknadin before stabbing him and killing him. Aknadin sent his spirit into Seto, and controlled him to attack Atem who had just arrived. Atem was overpowered, but the spirit of Kisara in the form of the White Dragon entered Seto's mind, where she killed Aknadin for good (in the English dub, Aknadin is sent to the Shadow Realm). At the end of the ceremonial battle, Aknadin is seen as one of the souls waiting for Atem in the after life. Because of this it is presumed that Aknadin saw what Atem did for Seto by giving him the throne and forgives Atem as well as his older brother.

In the Yu-Gi-Oh! GX manga, Aknadin appears as one of three priests who seal Tragoedia after judging him.

As the wielder of the Millennium Eye, Aknadin was granted access to a number of different abilities, such as initiating Shadow Games and summoning spirit monsters known as Ka, as well as being able to see into an opponent's mind. The Eye also had the ability to cast illusions and served to protect Aknadin from harm.

When Zorc Necrophades was resurrected using the Millennium Items, the dark being granted Aknadin a portion of his power, transforming him into the "High Priest of Darkness". With this newfound power, Aknadin was able to project dark energy blasts, open portals, and extract a person's Ka and seal them away (such as when he attempted to extract the White Dragon from Kisara and give it to Seto), as well as infiltrate people's minds, placing them under his control. The Millennium Eye, despite being used in the ritual to resurrect Zorc, was later revealed to have still been in Aknadin's possession during this time, so it can be presumed that Aknadin still had all the Eye's abilities at his disposal. 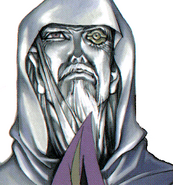 Akhenaden (manga)
Add an image to this gallery

Retrieved from "https://yugioh.fandom.com/wiki/Aknadin?oldid=4241859"
*Disclosure: Some of the links above are affiliate links, meaning, at no additional cost to you, Fandom will earn a commission if you click through and make a purchase. Community content is available under CC-BY-SA unless otherwise noted.