10000 Secret Rare card is a special variety of Secret Rare cards exclusive to the card "Ten Thousand Dragon". It was introduced to commemorate the release of the 10,000th card in the Yu-Gi-Oh! Official Card Game.

10000 Secret Rare cards have the same foil patterns as a 20th Secret Rare, but with the number 10000 replacing the "Yu-Gi-Oh! OCG 20th Anniversary" logo as watermark. 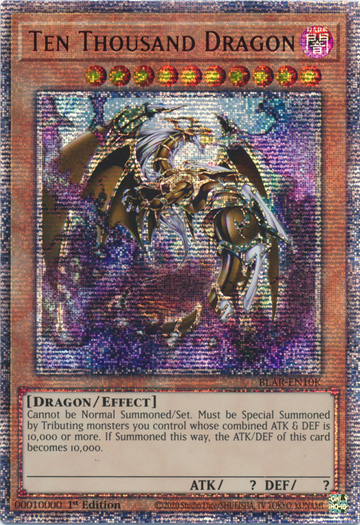 *Disclosure: Some of the links above are affiliate links, meaning, at no additional cost to you, Fandom will earn a commission if you click through and make a purchase. Community content is available under CC-BY-SA unless otherwise noted.