The game combines the Yu-Gi-Oh! Trading Card Game and a 5x5 game board. Each game board has a different theme, determined to by the character it belongs to.

According to the instruction booklet for the game, Solomon Muto created Destiny Board and this is evident from him commentating throughout each game and being able to use his Super Power to alter the rules for the game.

On the Title Screen, players choose whether the game will be single player (1 Player) or multiplayer using 1-3 Game Boy Advance Game Link cables (2 Players - 4 Players) and can access the Options screen to change various game setting. The number of players is selected by pressing the SELECT button on the Game Boy Advance system, and a game pack was required per person to play. In games where there is only 2 or 3 players, the computer will contol the other characters.

After setting up the game and confirming the win conditions, the action starts. The order of the players' turns are determined randomly at the start of the game and throughout the game Grandpa Trusdale gives a running commentary on each player's actions.

Each player is given an initial hand of monster cards (no magic or trap cards are used in this game) and from this hand players choose the cards they will set on the special Summon Die that is thrown at the end of each players turn.

At the start of each player's turn one card is drawn that respective player's Deck (There is no limit to the number of cards in each player's Deck) and a mini menu appears at the bottom of the screen. This menu enables players to set up to six of their available monsters on the Summon Die or view the destiny board from various perspectives. When a player rolls the Summon Die their character either moves or stays on their current square depending on the roll result.

Twelve characters from the Yu-Gi-Oh! series appear in Destiny Board; however, only eight are initially available. The other four must be unlocked by entering specific passwords on the title screen.

There are Super Powers players can occasionally use during a game to tip the odds in their favor for one turn. Super Powers do not have to be activated on the turn they are awarded but for most of the characters it is more beneficial to do so. Some of the characters abilities mimic and are renamed after Spell or Trap Cards from Yu-Gi-Oh! TCG.

Among others, the following non-player characters appear in the background:

The stages of Destiny Board Traveler are made of Level Maps and Linkage Maps. The game board itself is a 4x4 square walkway. The corners of the board are known as Special zones, because different events occur when they're landed on. They are also where the players begin the game.

These are the formations in which maps can be arranged. At first only a single board map is available; but up to six more map types can be unlocked as players win with different characters in 1 Player mode. When all seven maps are available, players can play with up to 8 fields at a time.

These are the areas which make up the Destiny Board itself. Each one is based on different locations from the manga series or generally specific to their respective characters. With the exception of the initial stage, Domino Park, these maps must be unlocked by winning with specific characters. Also only 7 new maps can be unlocked per game file, for a total of 8 fields.

In Destiny Board Traveler there are two types of die, a Xúc xắc Triệu hồi and a Xúc xắc Duel.

The Summon die is the one players place their monster cards on. The player can put from 0 to 6 monsters on the die, and the level of those monsters determine the number of spaces they move (e.g. if Blue-eyes White Dragon lands face up on the die, the player moves 8 spaces).

The die has one Star face and five regular faces. If a player repeatedly taps the A button, the chances of rolling the Star face increase.

The Duel Die is only used in the duels for control over a space. It can tip the duel in a player's favor or prevent them summoning any monsters at all. The die has one Attack/Defense reversal face, one reduce Attack/Defense face, and four miss faces.

To obtain control of a creep or opponent space, players must attack the currently occupying monster with their own one. Players use the monster whose card was face-up when the Summon Die was rolled. Players can choose to Attack, Defend or pass during duels.

Like in the Yu-Gi-Oh! TCG, the monsters' Attack and Defense total determines the outcome of the duel over all. But, the Duel Dice which is rolled by both players at the end of the duel can determine the outcome this the attack/defense match-up.

The victorious monster will either be summoned to the space or remain there, while the other monster is either returned to its owner's hand or sent to the graveyard.

If the duel ends in a tie, both monsters are sent to the graveyard and the space becomes open to all takers.

Like in the TCG, L5+ can only be used in a duel if the player can pay the required sacrifice cost.

The following anime original cards from the Waking the Dragons arc appeared in this game. None of them appear in any official Yu-Gi-Oh! media other than the anime and this game. All but three of them are Armor monsters.

The Japanese release does not include any promotional cards. 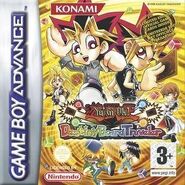 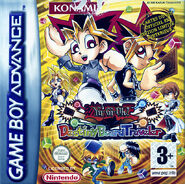