Zombie (Japanese: アンデット Andetto "Undead"), is a Type of monster representing undead beings, mostly mummies, skeletons or apparitions. They are perhaps the best type at swarming the field. Zombie monsters are known for having many cards that revive other zombies, most notable "Zombie Master", "Il Blud", "Plaguespreader Zombie", "Mezuki" and "Book of Life". They are usually DARK monsters, although a noticeable number are EARTH and FIRE. Zombie monsters often have low DEF, a factor that works in their favor, since "Pyramid Turtle" and "Goblin Zombie" can search out high-Level monsters with low DEF quickly. Although they have the ability to be Summoned or revived quickly, most zombie monsters have difficulty getting over 2500 ATK, besides the cards "Skull Flame" (which can be searched using "Pyramid Turtle"), "Red Ogre", "Despair from the Dark", "Endless Decay", "Berserk Dragon", "Vampire Genesis" and "Number 22". The best way to overcome this weakness is by adding a "Gorz the Emissary of Darkness" for the sudden beatstick or a "Ryko, Lightsworn Hunter" to blow up 1 card on the field, then mill the top 3 cards from your Deck and chance of putting Zombies in the Graveyard.

Also released in Generation Force was "Blue-Blooded Oni", which goes hand in hand with "Red-Blooded Oni", released in Galactic Overlord. These two monsters work with Xyz Monsters, detaching Xyz material from Xyz monsters both you and your opponent controls when they are Summoned. Based on their own effects, they could be run as a pair in any deck by themselves if the focus is Xyz Monsters.

"Number 22: Zombiestein" is the first Zombie-Type Xyz Monster to be released in the OCG. It packs a large ATK, 4500, the largest original ATK of all Zombies, and currently the strongest member of the "Number" archetype in terms of ATK value. It is also a Nomi monster, unable to be Summoned other ways aside from its original Xyz Summon, so it cannot be easily revived like all the other Zombies.

In the OCG, Zombies are Undead, although close examination shows that it is actually Undeat. This probably resulted from staff from Konami mistakenly printing 「アンデット」 instead of 「アンデッド」 on every Zombie card in Vol.1, and came into the spotlight when "Undeat Warrior" was released in Vol.2.

In the Yu-Gi-Oh! The Falsebound Kingdom, Zombies are treated as Fiend monsters.

Striker Zombies, while not too notable, have enjoyed some recent success in Japan. Being one of the only Zombie decks to not run a mill engine, they rely greatly on their search power to make plays. The deck was first seen at top 32 YCS Orlando 2011 and was run by Blake Brown.

Depending on the type of Deck its strength can vary, but the overall power of a Zombie Deck remains: its ability to quickly swarm the field with monsters (it is not uncommon to clog up one's entire Monster Cards zone in one turn) and gaining quite powerful draw power through "Allure of Darkness" and/or "Shutendoji".

Excluding the Zombie Mill variant, however, a Zombie Deck has some weaknesses. The most notable weakness of the Deck is its dependence on the Graveyard. While the extreme swarming capabilities of the Deck can overcome the aforementioned lack of sheer power, cards like "Macro Cosmos", "Dimensional Fissure", "D.D. Crow", and nearly every other card that can banish monsters or lock the Graveyard can effectively put a Zombie player at a severe disadvantage, if not outright disrupt one's strategy and cause the loss of a duel. "Burial from a Different Dimension" and "Imperial Iron Wall" can help to partially solve the problem (though the latter keeps "Plaguespreader Zombie" in the game, it makes "Mezuki" and "Book of Life" completely useless). In other words, the banish Deck can be the worst enemy for zombies because the cards that target the Graveyard are totally useless. But the Zombie Deck has another weakness in cards like "The End of Anubis" that disable your Graveyard, or cards like "Vanity's Fiend" that don't allow you to perform Special Summons.

"Banish" oriented decks and "Gravekeeper's" decks stand as direct opposition of what Zombie decks stand for. "Necrovalley" is an extremely devastating card that can put any deck at a disadvantage, but none more so than Zombies; it essentially puts the Graveyard off limits (as well as making "Mezuki" useless in the Graveyard).

Another weakness is the fact that Zombies tend to have low ATK power for their level, compared to other Types (Examples include "Il Blud" and "Vampire Lord"). This can severely hamper a Zombie Deck player if his/her opponent uses high DEF monsters to stall the game. There are a few cards that can help counteract this problem, most notably "Burden of the Mighty", "Solidarity" and "Pyramid of Wonders". The final, "Temple of the Sun", is a slightly more situational card that still would sit rather well in a Deck focused on Graveyard power.

The "Card of Safe Return" being Forbidden continues to take away a major draw force in Zombie Decks.

Zombie Decks got a boost from the release of the Xyz Monsters in the TCG, this is because of the great number of level four Zombies such as "Goblin Zombie" and "Zombie Master". However, the effect of "Goblin Zombie" will not activate when it is detached, because Xyz Material are not considered as being in play. Along with new support such as "Blue-Blooded Oni" and the like, players can pull off some good combos for the Type. 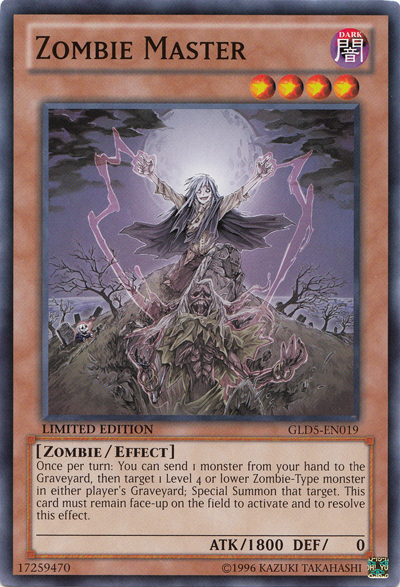