Psychic (Japanese: サイキック Sakikku) monsters had their debut in The Duelist Genesis, and they are used by Sayer in Yu-Gi-Oh! 5D's. Psychic-Types often resemble cyberpunk androids, cybernetically-enhanced humans, or strange mutants, and often feature elements of cyberspace, circuit board patterns, green coloring, and yellow electricity in their art. It is worth noting that many Psychic-Type monsters resemble what in the past were Machine-Type, Fiend-Type, or Spellcaster-Type monsters (such as "Mutant Mindmaster", "Kinetic Soldier", "Mind on Air" and especially "Jinzo").

Up until Extreme Victory, the majority of their effects and Spell Cards involved paying Life Points to activate powerful effects, while the Synchro Monsters and Trap Cards focused heavily upon restoring Life Points. The tendency of a Psychic-user's Life Points to change rapidly during a Duel allow a cunning player to make the most of cards such as "Megamorph" and optional cards that require Life Point payment, like "Solemn Judgment".

Psychic-Type monsters also support a heavy Synchro element with cards like "Emergency Teleport", "Mind Master" and "Overdrive Teleporter". They contain many notable Synchro Monsters, including "Thought Ruler Archfiend", "Magical Android", "Hyper Psychic Blaster", and "Overmind Archfiend". For a long while, there was no pure Psychic archetype, though half of the "Gusto", "Ritual Beast", and currently "Kozmo" archetype were composed of Psychic-type monsters.

However, in Booster SP: Highspeed Riders, The type finally receive its first pure-type archetype in the form of the "PSY-Frame". 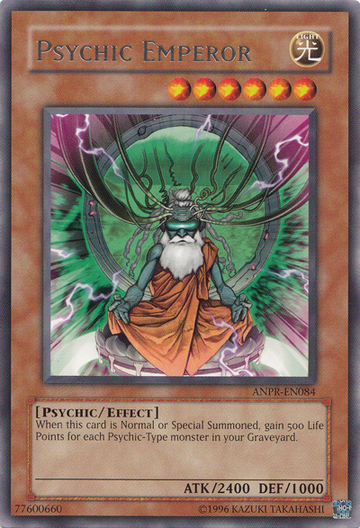