A Fusion Substitute Monster (融合素材代用モンスター, Yūgōsozai Daiyō Monsutā) is a monster with an effect that allows it to replace a single specifically named Fusion Material Monster for the Fusion Summon of a Fusion Monster, as long as the other monster(s) used are the correct one(s).

The effect that allows Fusion Substitute Monsters to replace a Fusion Material has no classification. It applies on the field (even while face-down), in the hand, and in the Graveyard. It does not apply while in the Main Deck or while banished, so this effect cannot be used for "Future Fusion" or "Parallel World Fusion". 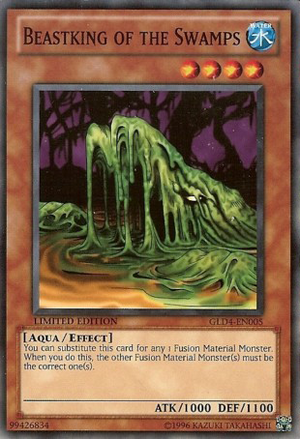