"Giác Đấu Long" (, Dyueru Doragon, Giác Đấu Long) is a series of dragonic monsters used by several key characters in the Yu-Gi-Oh! 5D's manga. They are said to be cards specifically designed for Turbo Duel rituals in ancient times. Six of the "Duel Dragons" shown are counterparts of the "Signer Dragons" from the anime, and play a similar role in the manga.

The majority of the series are Dragon-Type Synchro Monsters (the exceptions are "Power Tool Mecha Dragon", which is a Machine-Type, and "Dragonecro Nethersoul Dragon", which is a Fusion Monster). "Duel Dragons" with "Signed Dragon" counterparts display markings that seem to evoke the Mark of the Dragon somewhere on their bodies. "Duel Dragons" distributed by Skeleton Knight, as well as Skeleton Knight's and Rex Goodwin's Dragons, do not possess these markings. Both "Power Tool Mecha Dragon" and "Ancient Pixie Dragon", which resemble their anime counterparts, can be considered dark counterparts due to their DARK Attributes and alternate effects.

The "Duel Dragons" which are "Signer Dragon" counterparts often have a darker color scheme than the original, though "Stardust Spark Dragon" and "Blackfeather Darkrage Dragon" only demonstrated this when being used by the Priest of Light and Dark Crow respectively. Jack's "Hot Red Dragon Archfiend" does not appear to exhibit a darker color scheme, but this is difficult to discern to to the natural color of the "Duel Dragon". Both "Power Tool Mecha Dragon" and "Ancient Pixie Dragon" exhibited darker color schemes while Leo and Luna were possessed by their Dragons' Shadow Miasma; after both Dragons were purified by "Stardust Spark Dragon", they assumed the same color scheme as their original counterparts.

"Duel Dragons" originating from Skeleton Knight all have 3000 as ATK and/or DEF values. "Void Ogre Dragon" and "Beelze of the Diabolic Dragons" have both 3000 as ATK and DEF, while "Dragonecro Nethersoul Dragon" has 3000 ATK with 0 DEF. Upon evolving, these "Duel Dragons" increase their ATK to 4000; "Beelzeus of the Diabolic Dragons" also has 4000 DEF, and "Dragocytos Corrupted Nethersoul Dragon" has 2000 DEF. Rex Goodwin's "Ascension Sky Dragon" also possesses a 3000 value, with 3000 DEF (its ATK is ?).

"Duel Dragons" possess a strong miasma which causes their owners' personalities to become darker,[1] or even takes over them.[2] When this happened to Kalin, Jack angrily asked if his "Duel Dragon" had eaten his soul, suggesting that Kalin had failed to control the dragon and was instead being controlled. The signs of the strength of the bond with a "Duel Dragon" have many stages; those who have not gained dominion over the dragon properly often have blank eyes and a progressively darker personality, often emitting Shadow Miasma. Further succumbing to the "Duel Dragon" can lead to the skin of the face cracking and/or the whites of the eyes turning black, though all of these symptoms can be removed when purified.

They also appear to have more occult powers; When attacking Yusei, Leo's dragon showed him memories from Leo himself,[3] while when Sect got mad at the Skull Flames, his "Duel Dragon" card's miasma instantly caused them to fall on the ground unconscious.[4] Furthermore, Rex Goodwin was able to pass memories of Akiza's past life directly to her mind by just making her have contact with a "Duel Dragon" card.[5] "Stardust Spark Dragon" was able to show Yusei Fudo its own memories when he engaged in a One-Shot Run against it.[6]

However, the negative influences can be removed when a "Duel Dragon" is purified by another dragon. The only way to sever the link between a "Duel Dragon" and its holder is in a Duel. It usually happens when another "Duel Dragon" destroys the corrupted dragon, which is first demonstrated when Jack's "Hot Red Dragon Archfiend" clashed with Kalin's "Void Ogre Dragon". Kalin's Shadow Miasma was removed, and he returned to his original personality. Yusei Fudo's "Stardust Spark Dragon" later destroyed both "Power Tool Mecha Dragon" and "Ancient Pixie Dragon", freeing first Leo, and then Luna. Yusei would theorize that destroying "Beelze of the Diabolic Dragons" with "Stardust" would free Sect Injuin" from the "Duel Dragon", which was later proven to be true when he destroyed its upgraded form.[7]

According to Rex Goodwin, since ancient times, Turbo Dueling has been a ritual designed to fight and seal the darkness, and that the "Duel Dragons" were specifically designed for such rituals. In the past, they were fought on horseback. He says they are cards which sealed the dragonic power of the priests who controlled them, and adds that controlling or being controlled by that power depends on the strength of the Duelist's mentality. Because of that, he organized the D1GP in order to gather Duelists with strong mentality in order to control the "Duel Dragons", and according to him, save the world from Skeleton Knight.[8] However, his true intentions were later revealed to be reviving and controlling the Ultimate God through the Ritual, to which he needed strong Duel Priests and Priestesses. Five dragons ("Stardust Spark Dragon", "Hot Red Dragon Archfiend", "Blackfeather Darkrage Dragon", "Ancient Pixie Dragon" and "Power Tool Mecha Dragon") belonged to Priests of Light in the past, plus "Black Rose Moonlight Dragon", who belonged to a Duel Priestess. They were passed to new Priests and Priestess in the present by Rex and the Skeleton Knight, reviving the ancient ritual.[9]Usually, the "Duel Dragons" cards are blank, and only take form after obtaining a holder. Rex Goodwin and the Skeleton Knight seem to possess all of the "Duel Dragon" cards in the present, and distribute them to powerful Duelists, which they choose through several methods. Some include: Although how she obtained her "Duel Dragon" has not been specified, Luna most likely obtained hers from Rex. After Rex obtains the Ultimate God's power, he claims that all cards, including the "Duel Dragon" cards, were born from the Ultimate God, who is their master. With the Ultimate God's power, Rex gains control of the "Duel Dragons" of all Duel Priests and Priestesses, making their cards turn blank.[15] However, their prayers ultimately awakens the dragons' souls and release them from the Ultimate God's control, allowing Yusei to use them for their real purpose: to seal the Ultimate God and save the world from its darkness.[9] 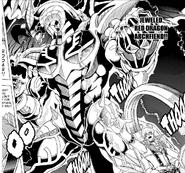 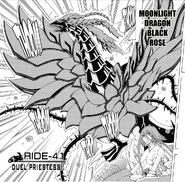 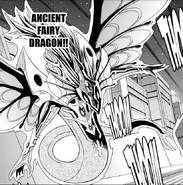 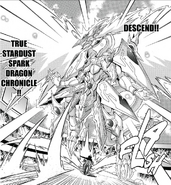 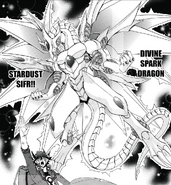 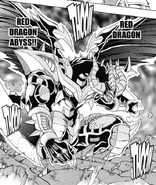 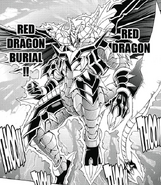 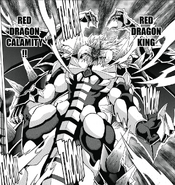