Crow Hogan is one of the primary protagonists in Yu-Gi-Oh! 5D's as well Yusei Fudo's and Jack Atlas's childhood friends from Satellite, and later the second Signer with the Tail Mark of the Dragon. He is also the foster brother of Yusei and Jack.

Crow is the last of the main protagonists in Yu-Gi-Oh! 5D's to appear in the show. His role is somewhat limited in season 1, as he does not show up until episode 30 and often comes in and out of the story. He plays a much more prominent role in season 2 and is one of the three main characters, alongside Yusei and Jack.

An alternate universe version of Crow will appear in Yu-Gi-Oh! ARC-V.[2]

Crow has dark-grey eyes and brushy-spiked orange hair with a viridian-colored headband embroidered with two rings at the right side. He wears his outfit from his days as an Enforcer, which consists of blue jeans, a yellow t-shirt, and a sleeveless brown cargo vest. He also wears a pair of earrings in the shape of screws. While riding his Duel Runner, he always wears a beak-shaped black helmet with plumes sticking from the sides, which includes an orange eyeshield and decorated with a red gem.

One unique thing about him are the criminal marks on his face. He has been marked at least twice; he only had the "M" in his time with The Enforcers so he gained the dot and eye marks after leaving the team.

Though possessing similar qualities and ideas to Yusei, such as helping others when needed, Crow is proven an impulsive and daring person who will rise up to any challenge and show that he is not a pushover. He is also generous and altruistic, as he is willing to fight for the sake of his friends and for those he considers his family, including underprivileged children that he helped raise in Satellite. In the English version he is very suspicious and stubborn, and has a fear of clowns due to an incident on his fifth birthday. 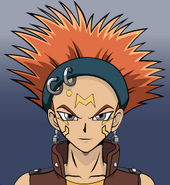 Crow uses a "Blackwing" Deck, primarily focused on Swarm and Beatdown tactics. He mainly uses cards such as "Blackwing - Gale the Whirlwind", "Blackwing - Blizzard the Far North" and "Rendering Tuning" to easily Synchro Summon his ace monsters, "Blackwing Armor Master" and later his "Black-Winged Dragon". He also uses cards like "Down Force" and "Trap Stun" to prevent his opponent's Trap Cards from disrupting his strategies.